DVD has been know by various names like double vertical strabismus, dissociated vertical divergence. DVD is characterized by elevation, abduction and excyclotorsion of the nonfixing eye without corresponding hypotropia in the other eye. It may be phoric or tropic, symmetric or asymmetric, unilateral or bilateral, comitant or incomitant.Upward drifting and outward movement of the occluded eye on cover testing demonstrate it. DVD is usually, but not always, bilateral but asymmetrical.

Many patients with DVD have anomalous head posture. Both ipsilateral and contralateral head tilt have been observed, which may mimic superior oblique palsy and congeal Park’s three-step test.DVD is also associated with sensory deviation as acquired entity after prolonged occlusion or after cataract extraction.DVD generally presents before 12 months of age.

DVD is diagnosed by Prism Under Cover Test (PUCT). The reversed fixation test was developed to measure dissociated vertical deviations and later adapted for dissociated horizontal deviations. This test makes it possible to rule out simulating conditions. DVD measured within ± 7 PD in abduction, the primary position and horizontal gaze is termed Comitant DVD. Incomitant DVD refers to a measurable disparity in magnitude of DVD in adduction, abduction and primary gaze.

Various non-surgical treatment options have been proposed to alleviate DVD. Observation is preferable in DVD that is controlled as phoria and for smaller deviations occurring infrequently. Steps to encourage fusion or bifixation by providing clear images by optimal spectacles.

Switching fixation by occluding the fixing or dominant eye, to encourage fixation to improve DVD in the non-preferred eye.

Surgery is often indicated when DVD is increasing in frequency, a phoric deviation is gradually converting to a manifest form and for anomalous head posture.Surgical treatment of co-existing deviation has limited role in DVD. Surgery on cyclovertical muscles remains main stay of treatment.

There is no single best procedure for treatment of DVD because the pathology of DVD is supra nuclear and we are trying to overcome it at infra nuclear level.

Surgeries performed unilaterally had the risk of DVD developing in the other eye.

Posterior fixation of superior rectus done alone or in combination with SR recession alone is not recommended for DVD due to high failure rate.

Resection of inferior rectus in DVD had good results. But complications like lid retraction, postoperative hypotropia, fat pad migration and re-surgeries were common.

Inferior oblique muscle’s neurovascular bundle as a new functional origin after anterior transposition of inferior oblique (ATIO) was studied by Stager et al and found to be effective in controlling DVD. ATIO had complications like up gaze deficit, divergence in upgaze and false appearance of inferior oblique overaction.

ATIO in incomitant DVD, inferior oblique overaction and V pattern appears to give predictable and stable results, but with low incidence of postoperative A pattern and upgaze deficits.

Informed consent for the study was obtained after the nature and possible consequences of the study were explained.

Patients with DVD attending GNEC strabismus services will be included in the study ANTIO will be done on the eye manifesting larger DVD.

Concurrent horizontal deviations will be treated by surgery as appropriate in the same sitting.

After taking full informed and written consent, ANTIO on the eye with larger DVD will be done in which inferior oblique is isolated to its insertion through an inferior cul-de-sac approach. 6-0 vicryl sutures will be used to secure the muscle in a bunched fashion. IO muscle’s posterior and temporal fibers will be transposed to 2mm below and 2mm nasal to the medial edge of the insertion of inferior rectus while the anterior fibers will be transported to 2mm medial to the posterior & temporal fibers of IO.Conjunctiva will be sutured with 8-0 vicryl sutures. Patient will be on steroid eye drops 6th hourly & ointment at bedtime post operatively. Postoperative follow up will be done on 1st post-op day, 1 week, 3weeks, 6 weeks and 12 weeks.

Amelioration of DVD in both groups will be evaluated and residual DVD up to 4 PD will be taken as successful outcome.

Age of the subjects ranged from 6 to 30 years

10 patients had esotropia and 4 had exotropia.

Rest had no pattern.

Post-operatively, none of the subjects developed abnormal torsion

The post-operative extorsion in eye with larger DVD was 5.38±1.34

The postoperative torsion in eye with smaller DVD was 6.93±1.97

The postoperative torsion corrected in degrees was 4.58 ± 4.

The postoperative torsion in the eye with smaller DVD was 6.93 ± 1. 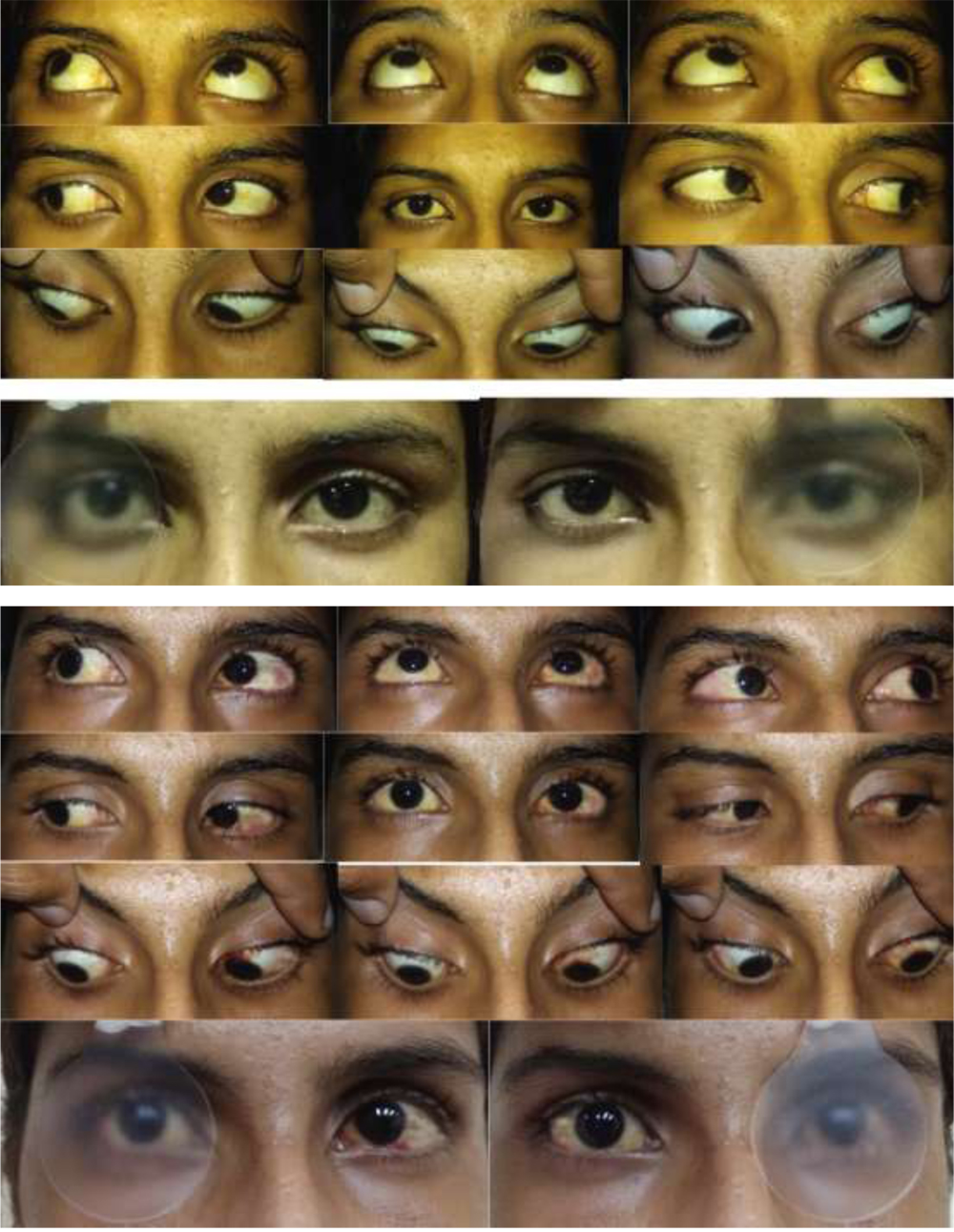 Horizontal muscle surgery and surgery in fellow eye for DVD:
All the subjects had appropriate surgeries to correct their horizontal deviations in both the groups.
Surgery for the fellow eye for DVD was done in 8 subjects
Of these superior rectus recession was carried out in 4 patients
Other patients(4) had recession of the inferior oblique muscle

• Every DVD is not to be treated.
• There is no algorithmic approach for treating DVD.
• DVD is mostly alleviated, not eliminated.
• Earlier there was mainly nonsurgical attitude for treating DVD in term of glass prescription or amblyopia therapy.
• Indications for treating DVD include abnormal head posture, manifest deviation, and risk of amblyopia, cosmetically unacceptable deviation.
• Surgery of co-existing horizontal deviation has limited role in treatment of DVD. Surgery on cyclovertical muscles remains main stay of surgical treatment

In this prospective study, 14 consecutive subjects over 1 year having DVD of ≥10PD enrolled. The present study is trying to compare success rate and correction of DVD by ANTIO, study important parameters mainly- Pattern, Torsion and document adverse surgical outcomes.

• In present study, inclusion criteria of Age was >5 years.
• We included 14 subjects in the study over a period of 1 year. Mean age was 15.0 ± 7.4 years.
• We excluded subjects having previous surgery.
• Higher Age in our study probably reflects that subjects < 5 years were excluded and late presentation of motility disorders in our society.
• In this study, there were 10 females and 4 males.
• We found strong female preponderance for which we have no explanation.
• It could be due to small sample size.

Primary IOOA, Horizontal Deviation:
10 subjects (71%) had primary IOOA.
We excluded subjects with previous surgery and less than 5 years. During correction of vertical component of dissociated deviation, horizontal component should also be taken care of.
DVD:
In our study Pre-Op DVD in Group A was 26.6 ± 2.8 PD
The amount of pre-op DVD included in this study is more than the known studies
Post-Op DVD was 3.86 ± 1.46 PD
In various studies the success rates for ANTIO was 60-80%
The success rate was defined as post-op DVD ≤ 4 PD.
92.9% success rate was noted in our study group
The amount of post operative DVD corrected was 22.8 ± 3.7 PD
Pattern:
Literature is limited on Pattern strabismus and DVD.
Primary IOOA often has been distinguished from DVD in adduction.
However correlation of SOOA and A pattern find frequent mention.
Pre-operatively, in Group A, 10 subjects had V-pattern.
Mean pre-op pattern was 15 ± 10.0 PD.
V pattern was found more than no pattern and A pattern, having been excluded.
Post-operatively none of the subjects developed significant A
Mean post-op pattern was 3.08 ± 4.87 PD
In this present study ANTIO improved V pattern better than ATIO. However it did not reach statistical significance.

Fundus Torsion (Objective):
Literature is scarce regarding torsion findings in DVD subjects both pre-op and post-op in ANTIO.
Pre-op Torsion, 8 subjects had extorsion.
Rest subjects had no abnormal torsion.
Postoperatively none of the subjects developed abnormal torsion.
Change of torsion was from 10.12±3.36 (pre-op) to 5.38 ± 1.34 (post-op)
Correction of torsion was 4.58 ± 4.26
According to the results in this study we found that ANTIO improved extorsion better