Necrotizing fasciitis is a rapidly progressive devastating infection characterized by fulminant tissue necrosis occurring most frequently in the limbs or abdominal wall. Periorbital location is significantly less common, which is mostly attributable to the rich blood supply to the head and neck (1). The condition typically originates at sites of prior blunt or penetrating trauma though the preceding trauma may be often minor and unrecognizable. (2). Since it is associated with a reported treated mortality rate of 8-15% (3,4) and rate of vision loss of 13-30% (3,4), management of periorbital necrotizing fasciitis should be centered on early recognition of clinical signs and symptoms mandating aggressive multidisciplinary approach. Here we report a rare case of periorbital necrotisingfascitis associated with burninjury following a roadtraffic accident.

A 19 yr old unconscious male was admitted in neuro intensive care with diffuse cerebral edema  following  road traffic accident by bike to bike collision along with silencer burn injury of  right eye and surrounding maxillary area. GCS was E1M1VT on admission.  Patient was febrile with tachycardia and hypotension. Bed side ocular examination revealed   3rd degree burn of right eyelids and periorbital tissues, with grade 6 ocular surface  burns as per the new classification of ocular surface burns, (5).(Figure 1 ). There was narrowing of palpebral fissure with purplish hue involving more than 90% bulbar conjunctiva  including the fornices, extending uptill  the eyelid margins.Totallimbal ischemia was noted.Cornea was hazy and pupil was not reacting .Fundus details was not clear .

Ultrasound bscanrevealed  no signs of globe peforation .CT brain showed swollen soft tissues around the orbital and maxillary region.(Figure 3).Patient was started on treatment as per the standard protocol for thermal eye injury including broad spectrum  iv and  topical antibiotics, topical steroids and cycloplegics.Within 48 hours, development of eschared tight eyelids with  necrosis spreading to adjacent soft tissues around maxillary region  and collapsed anterior chamber were noted.(Figure 2).Repeat bscan was done and chorioretinaldetatchment was ruled out. Immediate exploration of eyeball with debridment of eyelids and surrounding soft tissue was planned .Intraoperatively  debrided tissue was noted to be dusky ,with necrosis of all four recti muscles.There was no signs of globe perforation  and hence the reason for  collapsed AC was concluded  to be due to ciliary shutdown.Debridement continued until bleeding and normal tissue planes were appreciated.AC was reformed and  lateral canthotomy was performed . 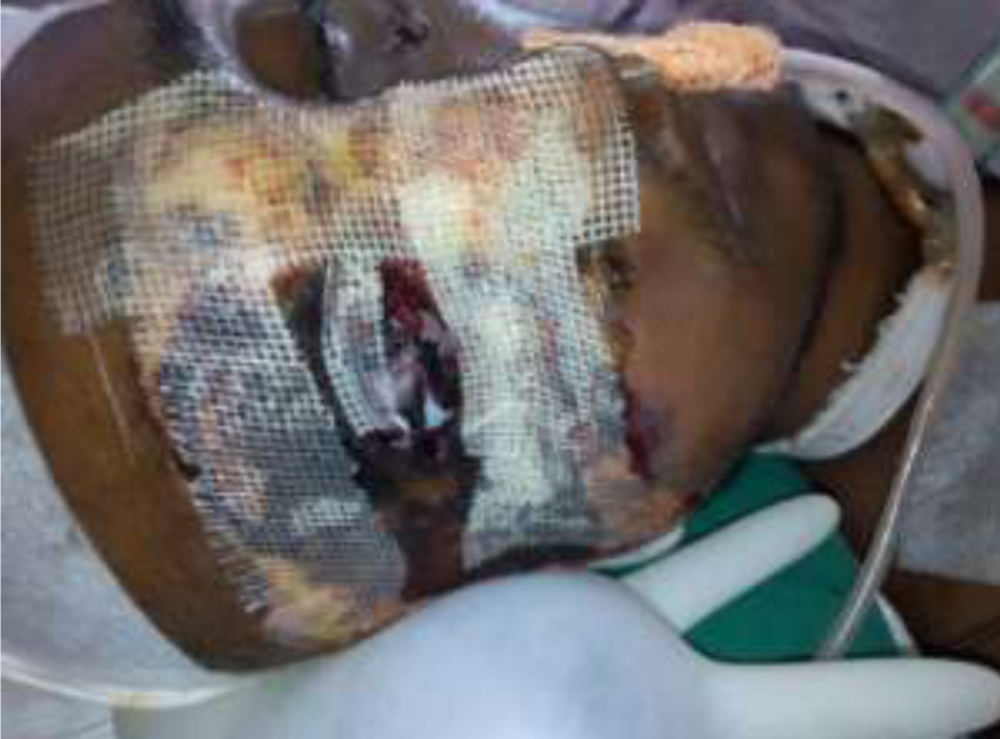 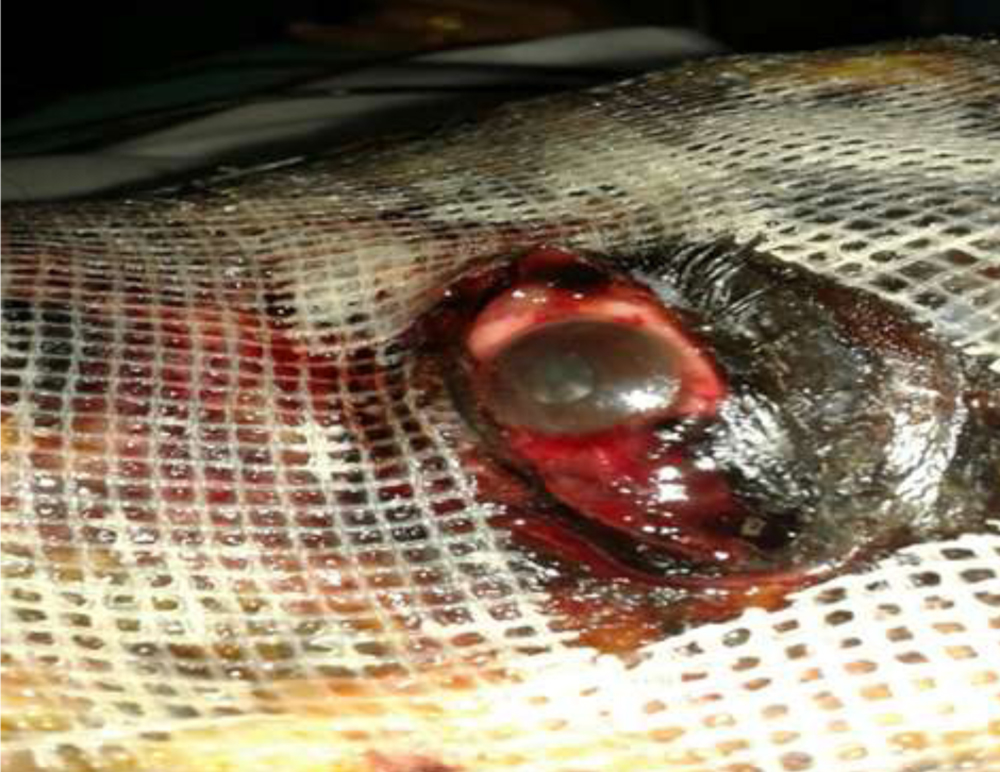 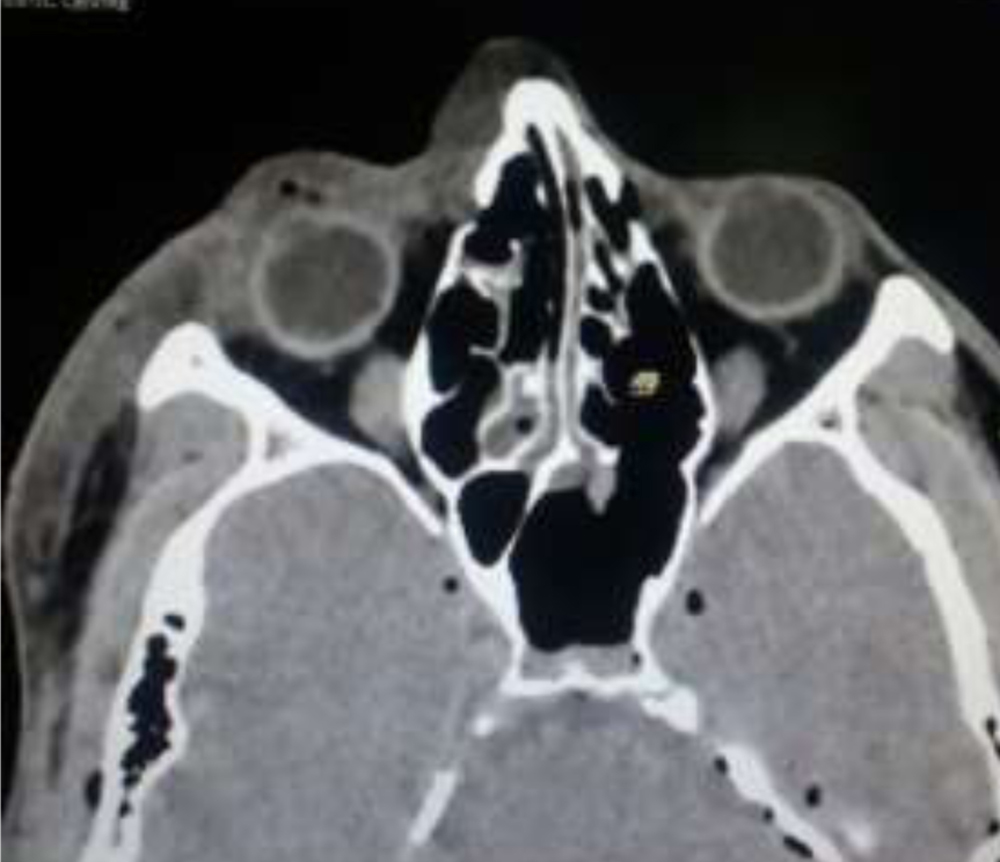 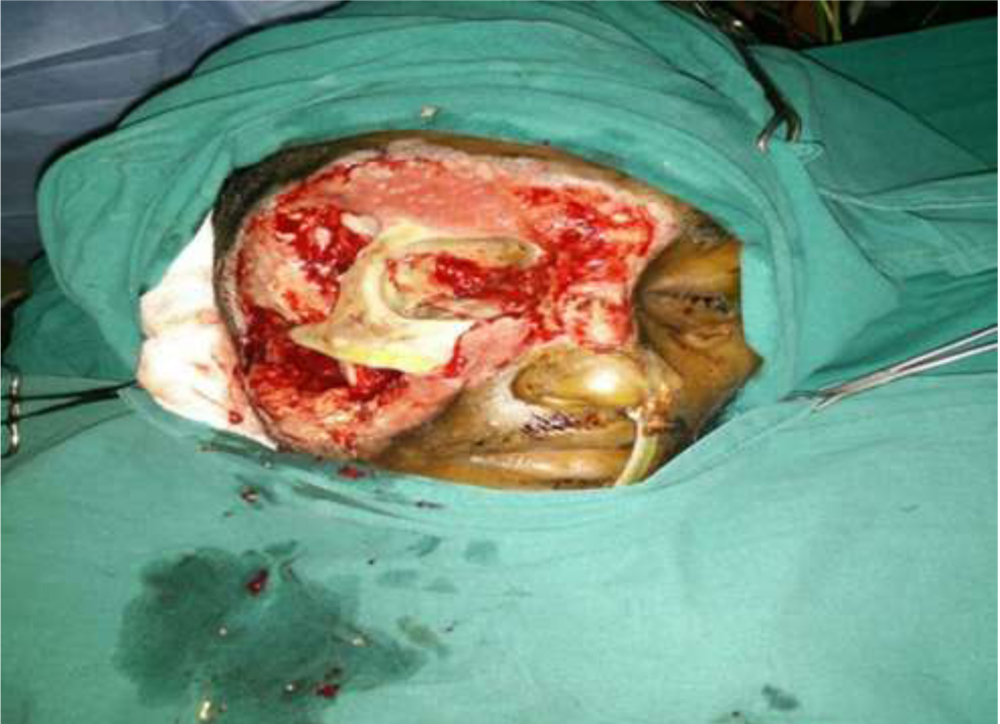 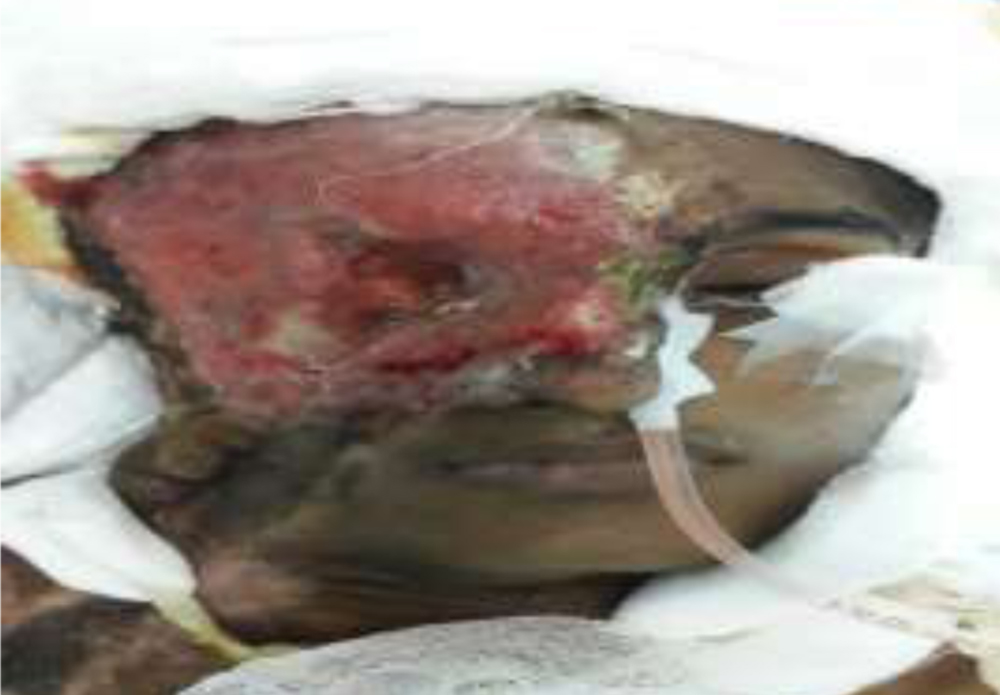 The maximum score is 13; a score ≥6 should raise the suspicion of necrotizing

fasciitis and a score of ≥8 is strongly predictive of this disease.

Necrotizing soft tissue infections, including cellulitis, myositis, and fasciitis, are devastating infections characterized by fulminant tissue necrosis. It tracks along the superficial fascia as well as overlying subcutaneous fat. Muscular fascia is less commonly involved (6). Muscle fibers themselves are often spared as the muscle generally has an abundant blood supply (7). Causative factors for periorbital necrotizing fasciitis can be identified in 70% of cases, with penetrating or surgical trauma accounting for the majority (48%) of cases (8).Necrotizing fasciitis has been  also described in previously healthy patients with no known trigger for infection.

Other known risk factors include chemotherapy,immunosuppression,and presence of other infections (8).Necrotizing fasciitiscan be categorised based on the causative microorganisms cultured from the wounds as: type I which  is a polymicrobial infection consisting of infection with mixed anaerobes, gram-negative bacilli and enterococci affecting predominantly immunocompromised patients and  type II  consisting  of group AStreptococcus (Streptococcus pyogenes) with or without a coexisting Staphylococcal infection.(9)Though most common organisms involved are Streptococci, Pseudomonas and other drug resistant infections are also reported, especially in the settings of burn injuries ,systemic illness, malnutrition, alcoholism or cancer.These organisms can proliferate producing elastase, alkaline protease and exotoxins that can cause destructive infections and necrosis.(10)Clinical presentation may involve erythema, edema and warmth of the affected area. Initially patients often have pain out of proportion to physical exam findings, which is a clinical clue to the diagnosis of necrotizing fasciitis (11). The infection progresses rapidly from cutaneous erythema to skin breakdown with bullae, containing violaceous fluid, to frank cutaneous gangrene. Development of anesthesia is another important clinical clue that points to the diagnosis of necrotizing fasciitis,particularly helping to distinguish fasciitis from myositis (12).Late in the infectious course, the patient will develop systemic signs and symptoms including fever, tachycardia, hypotension, and malaise.In unconscious patients like present scenario, recognition of early clinical signs can avoid life threatening complications.

parenteral antibiotics do not prevent the progression of the skin lesions to necrosis(13).

Wong et al. described a scoring system, the LRINEC score (Laboratory Risk Indicator for Necrotizing Fasciitis Score), whereby the results of six lab values (elevated total white cell count, reduced  hemoglobin, hyponatremia, hyperglycemia , elevated serum creatinine, and  raised C-reactive protein) were compiled to predict the risk of necrotizing fasciitis infection (14).  LRINEC scores higher than 6 strongly suggests necrotizing fasciitis (14), (table 1).Present case had a score of 10, strongly predicting diagnosis of necrotising fasciitis.The diagnostic utility of imaging studies including CT and MRI is ill-defined (5). Noncontrast CT is the best study to evaluate for the presence of gas in the fascial planes, which is a highly specific finding, but with very low sensitivity (3). With any clinical suspicion for necrotizing fasciitis, laboratory or imaging studies should never delay the patient en route to the operating room. Ultimately, surgical exploration and culture is the only way to definitively diagnose a necrotizing infection.

Although S.pyogenesis the bacterium mostfrequently involved, the microbiology of the infection cannotoften be predicted accurately before final identification oforganism on wound culture. Hence, empirical antimicrobialtherapy should consist of beta lactam antibiotics, such as penicillinor cephalosporin, and clindamycin(15,16,17,18).Oncea species is isolated, antibiotic treatment can be adjustedaccordingly(19).The patient should then be observed carefully,because a clear zone of demarcation should appear over the nextfew hours/days, allowing further debridement to be performedat the bedside or in the operating room. Patients with traumaticwounds or other contaminated sites should receive tetanus toxoid or human tetanus immunoglobulin, depending on theirimmunisation status. In addition , hyperbaric oxygen therapy has been advocated and accepted as anadjunctive treatment (20).

The most critical factors for reducing mortality from necrotising fasciitis remainearly recognition and urgent operative debridement(21,22).Aggressive, widespread debridement of all apparent necrotic andinfected tissue is essential to remove necrotic tissue, which servesas a nidus for infection.

Importance of early surgical debridement is stressed by severalauthors because this infection tracks along avascular tissue planes,where antibiotic access is limited; moreover, early debridement ofnecrotic fascia and subcutaneous tissues may prevent thrombosisof cutaneous perforators, therefore minimising skin loss.(24). Sincethe degree of subcutaneous necrosis typically is of a greater extent than suggested by changes in the overlying skin, debridementshould therefore be continued until viable tissue is reached. It issometimes helpful to performan exploratory incision over an areabeyond the limits of debridement when it is uncertain whethernecrosis is undermining viable skin. Debridement can be repeated as necessaryuntil the infection is controlled.

For patients with necrotising fasciitis localised to the periorbital area, withoutsevere morbidity at time of presentation, with rapid demarcationof the edge of erythema and zone of necrotic tissue, andwith no suggestion of orbital extension, Luksich and colleagues(19)emphasise a conservative management. However, extensive anddeeper periocular involvement requires aggressive debridement.It should involve mainly subcutaneous tissue that harbours thespreading infection.

Reconstruction can begin once the infection is resolvedand the wound is clean and stable. The choice ofreconstructive procedure depends mainly on the extent of thedefect. In periorbital necrotising fasciitis ,this is most commonlydonewith split-thickness skin-grafting, although other reconstructiveprocedures can also be effective.(23)

The reported mortality rate of necrotising fasciitis is 10-15% . However early intervention has been associated with better outcomes.Hence a high level of suspicion is warranted  in case of rapidly deteriorating ocular and  systemic conditions no matter how trivial may be the preceding injury.Similarly a wide spectrum  of ocular injuries has to be kept in mind in cases of  trauma associated with road traffic accidents.