Retrospective review of outcomes of surgeries done at our Centre from 2005 to 2016 on all cases of ocular injuries NLP on presentation.

: A total of 403 patients had NLP on presentation. 329(82%) because of severe structural damage or patient was not ready for surgery. 24(6%) eyes went for destructive/ cosmetic surgery. 50 (12%) went for retinal surgery 19(38%) had improvement, with vision ranging from hand motion to finger counting near face.

Patients with severe ocular injury and NLP occasionally recover LP or better vision. These patients may regain useful vision if prompt referral and intervention is done.

Trauma is a major cause of monocular blindness in the developed world. Very few studies have investigated this problem in rural areas 1, even though its etiology is likely to differ between urban and rural areas2-4. The development of strategies for preventing such injuries requires identification of the causes. Prevention is imperative because the society as well as the victims themselves (particularly children, in whom ocular injury has a poor prognosis), bear a heavy burden that is potentially preventable3. Sufficient allocation of resources forthe prevention of eye injuries would lighten this burden.

One consequence of ocular trauma is the formation of cataracts1. Methodologies have been devised for evaluating visual outcomes in eyes with trauma-induced cataracts and non-trauma cataracts5, but in the former, damage to surrounding ocular tissues may compromise the visual gain after surgery, thereby resulting in a varied success rate between the two. Traumatic cataracts often have poor visual outcomes in children due to amblyopia and recurrent inflammation

The Birmingham Eye Trauma Terminology System (BETTS) provides standardized definitions of ocular trauma5, thus serving a twofold purpose: (i) facilitating comprehension of the determinants for predicting the outcomes, and (ii) enabling comparison of visual outcomes following traumatic cataract surgery. Research literature does contain reports on visual outcomes of traumatic cataracts6,7, but most of them study individual cases or a small sample size.

The objective: of the present investigation was to study visual recovery in eyes with NO PL following management

Approval for this study was obtained from the hospital administrators and research committee. Written consent was obtained from the participants.The study was based on a retrospective design. Criteria for enrollment of patients included: diagnosis of ocular trauma in either eye between January 2005 and April 2016; absence of any other serious bodily injuries, and willingness to give written consent at the time of enrollment. Data on the subjects’ medical history was retrieved from the institution’s medical records, using a specific pre-tested online form.

A detailed history of the injury and treatment (including surgery), was elicited from each enrolled patient by using forms specially designed for this purpose.  Data for both initial and follow-up reports were collected using the online Birmingham Eye Trauma Terminology System (BETTS) format, laid down by the International Society of Ocular Trauma, while information about the surgery wasgathered using a specific pre-tested online form. Demographic details comprised patient characteristics, residence, and activity at the time of injury, cause of injury, and previous examinations and treatment modes. The elicited data was exported into a Microsoft Excel spreadsheet, and audited periodically to ensure complete data collection

Open globe injury group – this was further categorized into (i) laceration group, (with sub-categories of perforating injury, penetrating injury, and injury involving an intraocular foreign body), and (ii) rupture group.

The surgical technique was selected according to the location of affected tissues within the anterior to posterior segment range. Wound repair was done for open globe injuries, and further vitreoretinal surgeries performed to attain anatomical success. Closed globe injuries also were managed for anterior and posterior segment injuries. IOP control was achieved using medical and surgical management.

In patients undergoing corneal wound repair, the traumatic cataract was managed using a second procedure. Recurrent inflammation was more prominent in patients who had undergone previous surgery for trauma8,9. Haziness of ocular medium due to inflammation of the anterior vitreous was addressed with a capsulectomy and vitrectomy procedure performed via an anterior/pars plana route. Children below 2 years of age were subjected to both lensectomy and vitrectomy via the pars plana route. All children were treated by a qualified pediatric orthoptist for supportive amblyopia therapy, and by a pediatric ophthalmologist.

Patients with injuries sans infection were prescribed topical and systemic corticosteroids and cycloplegics, duration of medical treatment depending on the extent of inflammation in the anterior and posterior segments of the operated eye. The operated patients were re-examined after 24 hours, 3 days, and 1, 2, and 6 weeks, to enable refractive correction. Follow-up was scheduled for day 3, weekly for 6 weeks, monthly for 3 months, and thereafter every 3 months for 1 year.

The post-treatment visual outcome was predicted from the Ocular Trauma Score (OTS), by calculating the raw score based on the presenting vision and condition. This prediction was then statistically compared with the actual visual outcome. The Statistical Package for Social Sciences (SPSS ver. 22) was used to analyze the data. Descriptive statistics and cross-tabulation were used to compare the cause and effect of different variables.

With respect to the socioeconomic status, 87% hailed from a poor socio economic background.Out of 50 vision salvaging procedures, 19 (38%) regained vision > NO PL. Acceptable anatomic success could be achieved in all cases.

A comparative study was done based on type of injury as classified by BETTS, and no significant difference was found (p = 0.139) (Table 2)

Table 5 displays the variety of surgeries performed on the subjects of study. No significant difference was observed among the different tissues affected by injury. Similarly, the nature of activity during injury, and the object causing injury both did not significantly affect the results.

The timing of presentation is an important consideration, because in paediatric patients, the media opacity may be crucial for vision-deprivation amblyopia. Lens vitreous admixture when present, is a potent stimulator for further proliferative vitreoretinopathy, and moreover, can result in traction on the retina; hence primary extraction of the lens and vitreous is imperative in such patients. Late presenting injuries may have greater inflammation of disc, and macular changes may further lead to difficulty in decision-making about perception.12

Data from the present review suggests that presentation at 2 – 30 days after injuryresults in improved visual outcomes.12 Introduction of the Birmingham Eye Trauma Terminology (BETT) system has standardized documentation of ocular trauma. The international classification of ocular trauma, which was proposed almost 15 years ago, requires re-evaluation, and should be more robust in terms of predicting the outcome8

Assessment of light perception is a subjective measure and not a fool proof test in the presence of severe media opacity secondary to dense vitreous haemorrhage, traumatic cataract, dense hyphema and corneal edema.8, 9 Assessment of light perception even with the bright light of an indirect ophthalmoscope can give false impression of NLP.10 Light perception in case of severe ocular trauma seen in the paediatric age group, and may therefore be a confounding factor. Even in situations in which enucleation seems inevitable the ophthalmologist should discuss the possible options with the patient, before taking a final decision. Primary enucleation for severely traumatized eyes with NLP in view of risk of sympathetic ophthalmia, was a controversial approach. Sympathetic ophthalmia with potential for bilateral blindness is a relative indication for enucleation of an injured eye.19 Most reported cases (65%) occur between 2 weeks to 2 months after injury, and rarely occur during the first 2 weeks after trauma.19 However, the actual rate of post-traumatic sympathetic ophthalmia is not clear, and reported rates vary from 0.28% to 1.9%.9, 19 The use of modern immunosuppressive drugs has also improved treatment and control of sympathetic ophthalmia. As such, primary surgical repair should not be abandoned for the risk of sympathetic ophthalmia in eyes with NLP. Currently, most surgeons recommend globe salvaging procedure for eyes with severe trauma with no light perception vision at initial presentation.

Visual acuity can be profoundly impaired to the extent of no light perception (NLP) in presence of significant media opacity (e.g. corneal oedema, hyphema, cataract, and dense vitreous haemorrhage), retinal detachment, associated subretinal or subhyaloid haemorrhage, haemorrhagic choroidals and even psychological factors (e.g. hysteria).19 Ultrasonography is useful for assessment of posterior segment in the eyes with media opacity, and to differentiate between retinal detachment and vitreous haemorrhage, but it is sometimes difficult to differentiate a detached retina from blood clots in the vitreous cavity or membranes.19 Before deciding on enucleation in patients with NLP, reversible causes of vision loss should be excluded including psychological factors.19,20

Optic neuritis following trauma may cause dense central scotoma which may be falsely interpreted as a NPL case. Medical management with cortical steroids may lead to reduction in central scotoma, resulting in light perception.

Traumatic optic neuropathy causing no perception in light, may be because of a direct optic nerve injury, or injury to vascular supply in the region.21

Conclusion: Patients with severe ocular injury and NLP occasionally recover LP or better vision. These patients may regain useful vision if prompt referral and intervention is done. It highlights the fact that even in severely traumatized eyes with NLP, surgical repair can restore ambulatory vision. Preservation of the globe offers the advantage of positive psychological impacts on the patient and his relatives. Counselling of the trauma victim and family forms an integral part in management of severely traumatized eyes. Most patients may prefer to retain the repaired eye because of the great psychological impact of enucleation. The surgeon’s role is to help the patient make the best decision in this regard. However, larger multicentre prospective studies are recommended to assess the final anatomical and visual outcome in eyes with no lightperception following surgical intervention in open globe injury.

Table 2. Comparative study according to

Figure 1: Pie chart showing distribution of patients according to age 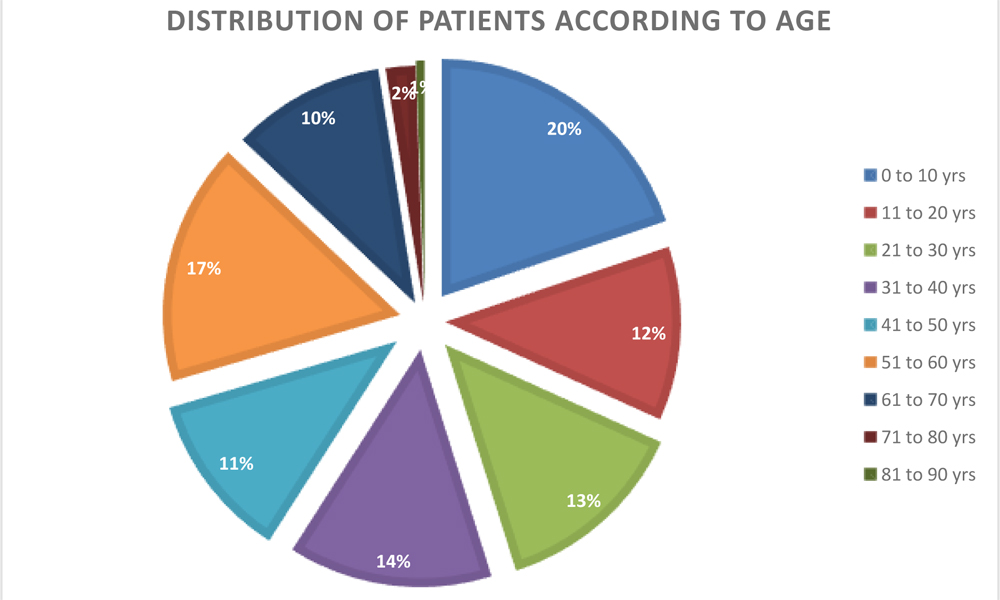 Figure 2: Pie chart showing distribution of patients according to sex 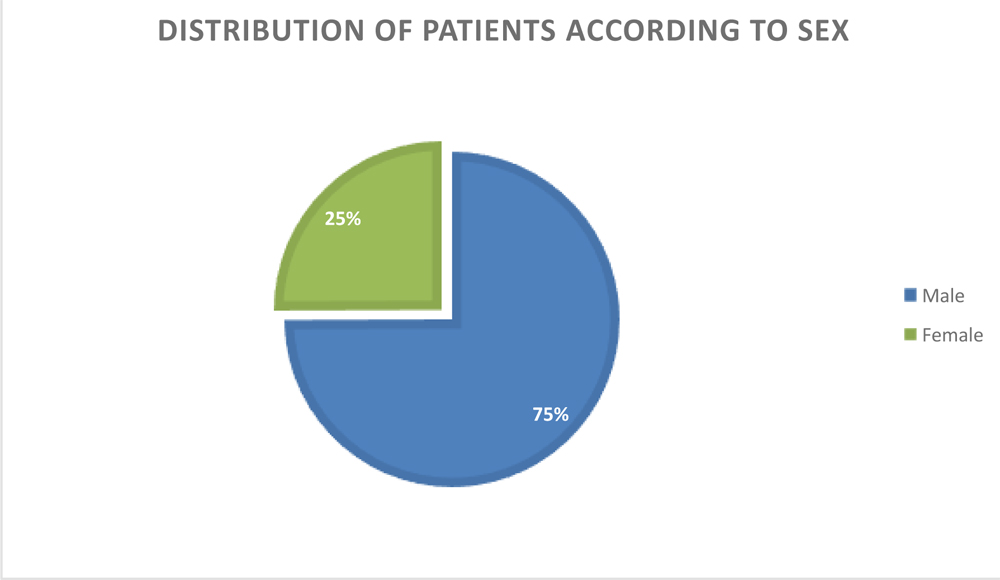 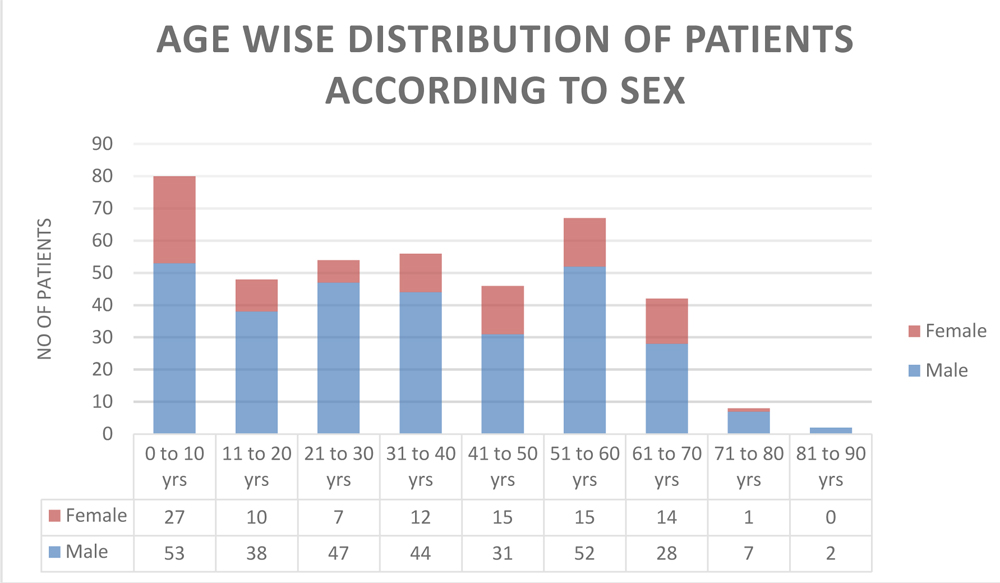 Figure 4: Pie chart showing distribution of patients according to category of surgical procedure 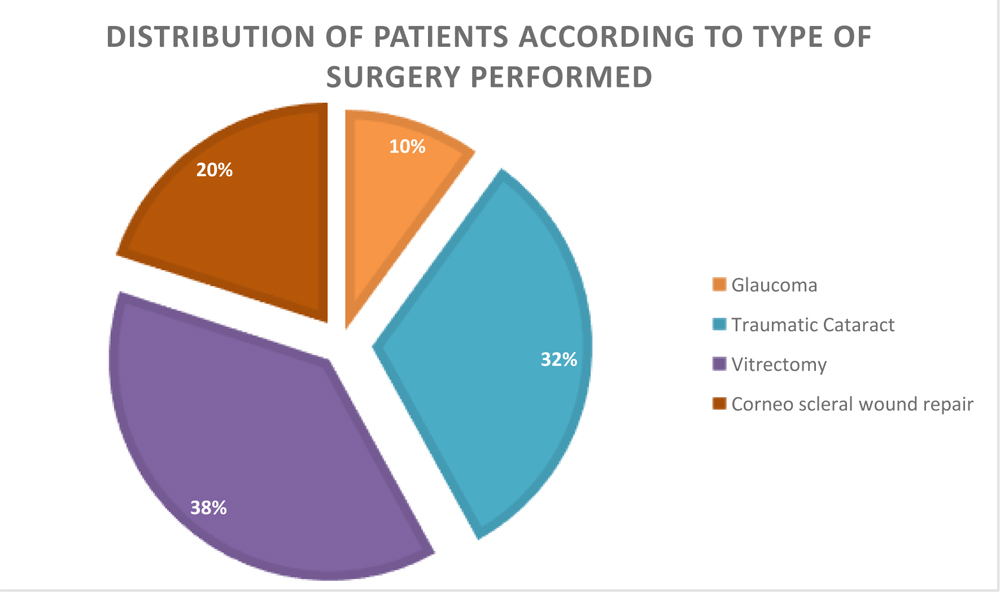