Fifteen patients of microtropia were studied. Macular and RNFL thickness were obtained using spectral domain OCT and were compared between microtropic  eye and contra lateral healthy eye.  Macular thickness was evaluated in nine quadrants using the early treatment diabetic retinopathy study (ETDRS) grid. The foveal thickness and the thickness of the outer segment (OS) and photoreceptor inner segment (IS) layer were measured by the embedded OCT software.

Microtropia is defined as a manifest deviation of less than 5° in which ARC (giving rise to abnormal binocular single vision (ABSV)), normal motor fusionand reduced or absent stereoacuity are found. In addition, amblyopia, a foveal suppression scotoma, and uniocular eccentric fixation are present and there is a close association with anisometropia. The term microtropia “with identity” is used by most authorities to describe patients with no manifest movement on cover test, the eccentric fixation point coinciding with the angle of ARC. Microtropia “without identity” describes patients in whom the manifest movement is demonstrated on the cover-uncover test. Microtropia may be primary, when there is no history of previous large angled strabismus or secondary following surgical or optical correction of a larger strabismus or associated with other ocular pathology. [1]

Yen et al. hypothesized that the normal postnatal reduction predicted that this would cause increased RNFL thickness. [2] If this does indeed occur, it is likely that the arrest of normal postnatal changes would result not only in increased RNFL thickness but also would affect the normal maturation of the macula, including movement of Henle’s fibers away from the foveola and a decrease in foveal cone diameter. This would result in increased foveal thickness. [2] Furthermore, because of the reduced apoptosis of retinal ganglion cells, the thickness of the ganglion cell layer in the macula would also be increased. The purpose of this study was to evaluate the structural changes of the macula in patients with primary microtropia using OCT image segmentation.

It was our plan to investigate macular and retinal nerve fiber layer thickness (RNFLT) in microtropic eyes to determine whether it is thicker. Several techniques to evaluate the RNFLT, such as red-free ophthalmoscopy, scanning laser polarimetry (SLP) and optical coherence tomography (OCT) have been described. OCT is anon-invasive, noncontact technique that measures RNFLT. [3, 4]  The RNFLT measured by OCT corresponds to the RNFLT measured histologically.[3]  Because OCT is based on nearinfrared interferometry, the thickness measurement is not affected by refractive status or axial length of the eye, or by light changes in nuclear sclerotic cataract density.

The purpose of our investigation is to use optical coherence tomography to measure macular and RNFLT in patients with microtropia, and to compare the macula and RNFL thicknesses of the microtropic eye and the normal eye in patients with primary microstrabismus.

This study was performed from April 2014 to March 2015 on 15 microtropic patients between the ages of 10 years and 25 years who were diagnosed with unilateral diminished vision because of microtropia to measure the Retinal nerve fiber layer and Macular Retinal Layer for both microtropic and normal fellow eyes by OCT.  Patients were recruited from the strabismus clinic of Global Hospital Institute of Ophthalmology, Abu Road after Institutional Review Board (IRB) approval.

Diagnosis of a microtropia was determined by the following criteria: (1) Cover test revealing only a latent deviation or no deviation, in patients with microtropia with identity, or a small manifest deviation in microtropes without identity, measuring <5°. (2) The Irvine 4 dioptre prism test1 was employed to detect a central suppression scotoma in the microtropes with identity. (3) Bagolini glasses confirmed the presence of ARC. (4) The prism reflex test (usually 20pd  base out) detected the presence of motor fusion or alternatively prisms were used to measure the fusion range. (5) The TNO stereoacuity test was selected to measure the stereoacuity levels in the majority of patients, but if a negative or inconclusive response was found, then the Titmus fly  test was performed.

Eligibility testing included visual acuity, cycloplegic refraction, manifested refraction, fundus examination, and ocular motility test. Patients with a neurological disease or ocular diseases or nystagmus, patients who were too young to cooperate, and patients whose pupillary dilation was not sufficient were excluded from this study. Informed

consent was obtained from the patients or children’s parents. The measurement was performed by the same examiner.

Prior to the examination, the pupils were dilated with 1% cyclopentolate and phenylephrine.

To measure the thickness, the examiner focused a scanning beam on the fundus with an infrared sensing camera. Subsequently, the images were obtained by performing macula scan. RNFL scan was used for retinal nerve fiber layer thickness measurement for each eye. The map of the macula thickness measurement was composed of three concentric circles: a central circle, an inner ring and an outer ring. Macular thickness was evaluated in nine quadrants using the Early Treatment Diabetic Retinopathy Study (ETDRS) grid comprising three concentric circles with diameters of 1, 3, and 6mm. The quadrants were named the central zone, inner superior-nasal-inferior-temporal and exterior superior-nasal-inferior-temporal from innermost to outermost (Figure 1). Each area was compared with the corresponding area in the fellow eye. The results were analyzed statistically using SPSS version16. Comparison was performed using student’s t-test. P values less than 0.05 were considered to be significant.

The retinal thicknesses were measured by experienced observer who was masked to the diagnosis and other clinical information. They measured the retinal thickness manually with the embedded OCT software. The ONL thickness was distance between the outer border of the inner limiting membrane and external limiting membrane (ELM) at fovea. The photoreceptor IS length was measured as distance between ELM and outer border of highly reflective line representing the ellipsoid zone (EZ) at the central fovea. The photoreceptor OS length was measured as distance between EZ and RPE at the centre of fovea. (Fig.2)

(All the measurements should be either in microns or mm)

Small angled squint with characteristics consistent with the term microtropia has been recognised for over 40 years. [5-7] Parks and Eustis introduced the term monofixational phoria[8]  which they later revised to monofixation syndrome[9], to describe an absence of bifoveal fusion with maintenance of normal retinal correspondence (NRC) associated with an enlarged Panum’s fusional area. Microtropia has been the subject of debate since Lang coined the term to describe a small angled strabismus with anomalous retinal correspondence (ARC), normal fusional amplitudes, and reduced stereopsis.[10]

Microtropia is considered as a sensory and motor phenomenon leading to diminished vision and abnormal binocularity. There is no published literature available on structural changes in disc & macula in cases of microtropia. There is lack of published evidence to confirm the view that microtropes have abnormal nerve fibre layer thickness and OS length.

6. Gittoes-Davies R. An examination of the aetiology and treatment of small convergent deviations, associated with a low degree of hypermetropia with a new approach to the treatment of this condition. Br Orthop J 1951;8:71–84.

7.Jampolsky A. Esotropia and convergent fixation disparity of small degree:differential diagnosis and management. Am J Ophthalmol 1956;41:825–33. 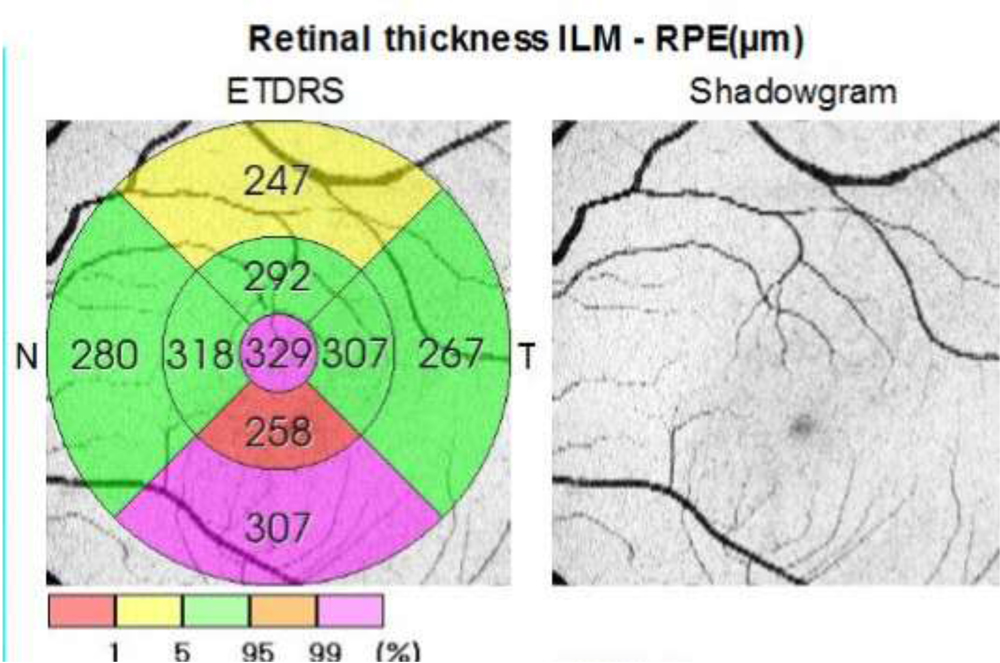 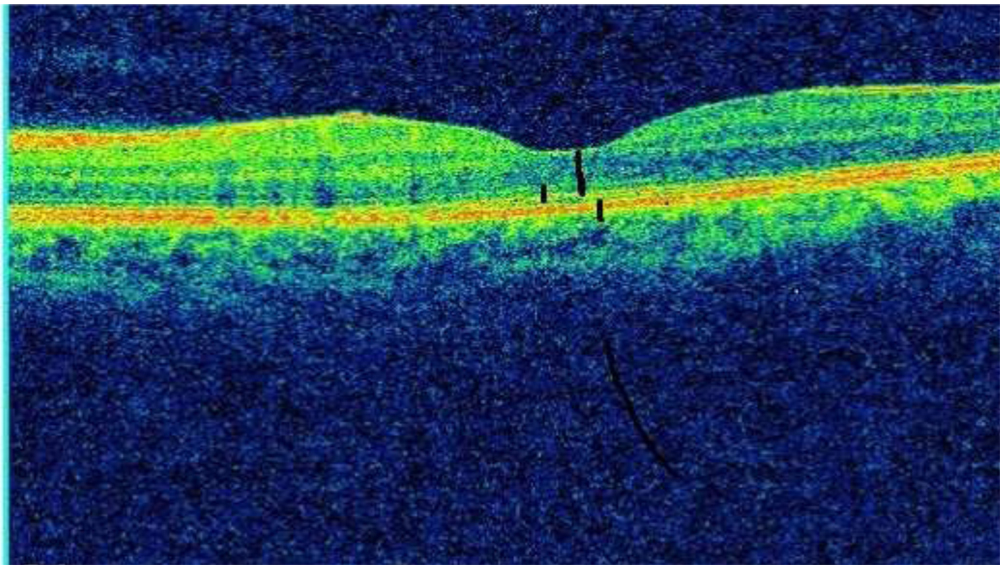