Aim: To estimate IOP lowering effect of SLT over 6 months.

Method: Prospective study of 51 eyes of 43 patients that underwent SLT. Age, type of glaucoma, pre SLT IOP, lens status (phakic vs. pseudophakic) and number of anti glaucoma medications (AGMs) were recorded prior to SLT. Post laser IOP was recorded at 1 week and 1, 3 and 6 months.

Glaucoma is a chronic condition characterised by progressive loss of the axons forming the optic nerve, leading to characteristic optic disc appearance and visual field defects. Quigley and Broman1 have estimated that 79.6 million people will be affected by glaucoma in the year 2020, 74% of whom will have open angle glaucoma (OAG). The burden of disease is increasing in India as well, with the six year incidence of  primary open angle glaucoma (POAG) in a south Indian population estimated to be around 2.9%2.

Traditionally, POAG has been treated by the use of anti glaucoma medications, laser trabeculoplasty and filtration surgeries, including trabeculectomy and glaucoma drainage devices. The use of laser trabeculoplasty to lower the IOP was first done by Wise and Witter3. However, the damage this laser caused to the trabecular meshwork4in the form of eventual scarring and fibrosis was deemed by some authors as undesirable in the setting of glaucoma and altered trabecular meshwork (TM) function. These damaging events were much less in selective laser trabeculoplasty(SLT). The pilot study on SLT was conducted by Latina et al5.The absence of any literature regarding the response of glaucomatous eyes to the IOP lowering effect of SLT in India is what prompted us to conduct this study.

1.To study the IOP lowering effect of selective laser trabeculoplasty in patients of open angle glaucoma in an Indian population over a follow up period of six months.

2.To study the change in the number of AGMs over a period of 6 months post SLT.

3.To study the effect of different variables such as pre SLT IOP, type of glaucoma, TM pigmentation, lens status and SLT parameters over the final change in IOP.

This study was a prosective case series, conducted between August 2013 and October, with a follow up period of six months till April 2016. All patients that underwent SLT during the study period were included in the study, provided they met the inclusion criteria.

Age of the patient, gender, type of glaucoma, number of years the patient has been using AGMs, best corrected visual acuity, IOP in both eyes and lens status were documented prior to SLT. SLT parameters were noted for all eyes. Following SLT, IOP spike if any was documented, and the use of AGMs was recorded at one week and later at one, three and six months. These were then compared with the pre SLT values and the effect of various parameters on the IOP changes was studied.

Complete Success was defined as the percentage of patients who followed up at 6 months that had IOP < 21 mm hg or IOP reduction ≥ 20% from pre SLT IOP, who were not on any AGMs.

Qualified Success was defined as the percentage of patients who followed up at 6 months that had IOP < 21 mm hg or IOP reduction ≥ 20% from pre SLT IOP, who were on the same or fewer number of AGMs as compared to pre SLT usage of AGMs.

We also looked at the number of eyes that required glaucoma filtration surgery or additional selective laser trabeculoplasty during the follow up period as an indirect indicator of SLT failure.

This study was approved by the Ethical Committee

SLT is performed on a slit lamp based delivery using a Q-switched, double frequency Nd: YAG laser (532 nm) and a Latina lens. A standard spot size of 400 microns is employed and the TM is targeted for a pulse of duration 3 nanoseconds. The starting energy per shot is usually 0.8mJ; the desired end point is the appearance of the so called ‘champagne bubble’. If this is visualised, the energy is progressively lowered until the minimum energy at which this bubble is visualised is seen. This is then the energy per shot for the rest of the procedure. Contiguous spots are delivered to the area of TM as planned (180, 270 or 360 degrees).

Statistical analysis was performed using Microsoft Excel and SPSS (Statistical Package for the Social Sciences) Version 14.0. Pre SLT IOP and AGM usage were correlated and compared with post SLT IOP and AGM usage respectively, using  Paired T test. Correlation of continuous variables such as patient age, number of SLT shots and total SLT energy with IOP reduction at 6 months was estimated in terms of Pearson correlation coefficient, whereas the effect of dichotomous variables such as the eye treated (left or right), gender or lens status (phakic or pseudophakic) on the IOP reduction at six months was estimated using the Unpaired T test. The ANOVA test was used when more than two groups were to be compared with each other in terms of their effect on the response to SLT at six months (TM pigmentation, type of glaucoma). We also conducted a univariate regression analysis to look for risk of failure for different variables such as age, lens status and SLT parameters.

Sixty nine eyes of 59 patients underwent SLT during the study period. Exclusion of 18 eyes of 16 patients was done based on the exclusion criteria. 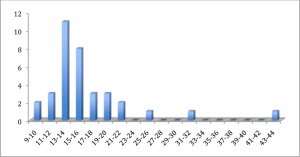 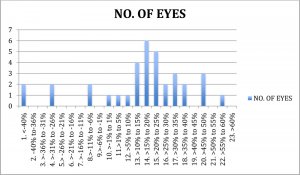 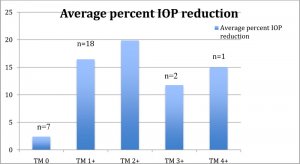 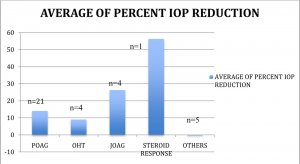 DISCUSSION
The mean age of patients in our study was 56.73±15.34 years.
Age has not been found to significantly influence the IOP lowering effect of SLT by most authors6–8, which concurs with our observations.

There was no effect of gender on the response to SLT at six months (p=0.63). Bruen8 and Lee10reported similar observations.

The minimum fall in IOP post SLT to define success has been mentioned as ≥ 20% from pre SLT values, with or without additional criteria.

Our total success (complete plus qualified) is 45.71% at six months, which is less than reported in literature; however the variable criteria for success in some studies6 were less stringent than ours, or the duration at which success was evaluated was less than the current study10. Patel et al11 showed visibly better success rates over a longer duration of follow up.

During our follow up, we found that the number of topical AGMs used to maintain the IOP in these eyes at acceptable levels was decreased at every visit compared to pre SLT AGM usage; this was significant at 1 week and six months A similar decreased dependence on AGMs was noted by several other authors. Patel et al11 have noted that the decrease in the number of AGMs could be seen upto five years after SLT.

Sayin et al6 reported no effect on SLT response due to number of AGMs used at baseline (p=0.06), similar to our observation.

Although eyesin our study with TM pigmentation 2+ showed higher mean percent IOP reduction than TM 1+ eyes and TM 0 pigmentation eyes, this was not found to be statistically significant, and the eyes with TM 3+ and 4+ were too few.

While the eyes treated with 180° SLT have shown apparently greater IOP reduction than 360° SLT, we did not find any statistically significant effect of the angle covered with laser on the IOP reduction at six months. This was similar to what has been reported by several other authors.13,14

Eyes that do not respond well to SLT often require subsequent interventions to control the IOP; 17.65% eyes in our study underwent trabeculectomy within the six month follow up period; a further 5.88% were advised to undergo the same. This was not very different from the combined rates noted by other authors for trabeculectomy or SLT done post primary SLT7. In another study16, SLT had to be repeated in 11% eyes within one year. We did not perform any repeat SLT in our study.

Selective laser trabeculoplasty resulted in significant reduction in intraocular pressure over a six month follow up period and decreased the dependence on antiglaucoma medications, however most of the baseline characteristics could not predict the response to SLT.

Further studies with a longer duration of follow up are required to evaluate the response to SLT over a period of few years.