CONCLUSION: Analysis of GCL thickness can be used as noninvasive, cost-effective tool to differentiate NAION and ON in cases with overlapping clinical picture.

Optic neuritis (ON) and non-arteritic anterior ischemic optic neuropathy (NAION) are the two most common types of optic neuropathies in adults. They also share a host of overlapping clinical features, which poses the difficulty in distinguishing between the two. However, differential diagnosis is generally possible based on age of onset, presence of pain, rate of recovery and type of visual field loss. Optic disc edema, is most commonly associated with NAION, although it may also be seen with one – third of ON cases (Warner et. al 1997; Galetta et al. 2011).

A prospective study was undertaken in the outpatient department of Aravind eye hospital, Coimbatore, between January  to May 2017.

A total of 40 patients with acute optic neuritis and 40 NAION patients were enrolled along with their age matched controls, after obtaining informed consent. OCT is done to assess the mean GCL thickness, especially in the superior and inferior quadrant and the absolute values of their differences were compared between ON and NAION .

A prospective, observational study was performed to compare the mean GCL thickness between eyes with NAION and those with ON. A case control analysis was performed using healthy controls, age matched to each patient, evaluated with OCT at one point in time.

Diagnosis criteria: On the basis of clinical presentation

Painless swelling of the optic disc

Pallor of the disc

Usually with a central scotoma,

Mild or no optic disc swelling,

Based on the diagnostic criteria, patients were selected after a complete neuro – ophthalmological examination which included the assessment of the best corrected visual acuity using Snellen’s optotypes. Color vision discrimination was assessed using Ishihara’s charts. Fundus examination was done and high definition OCT (HD-OCT). Each subject had both their eyes scanned using standard acquisition protocol. The macular cube (521 9 128 line scans) were used to assess GCL. 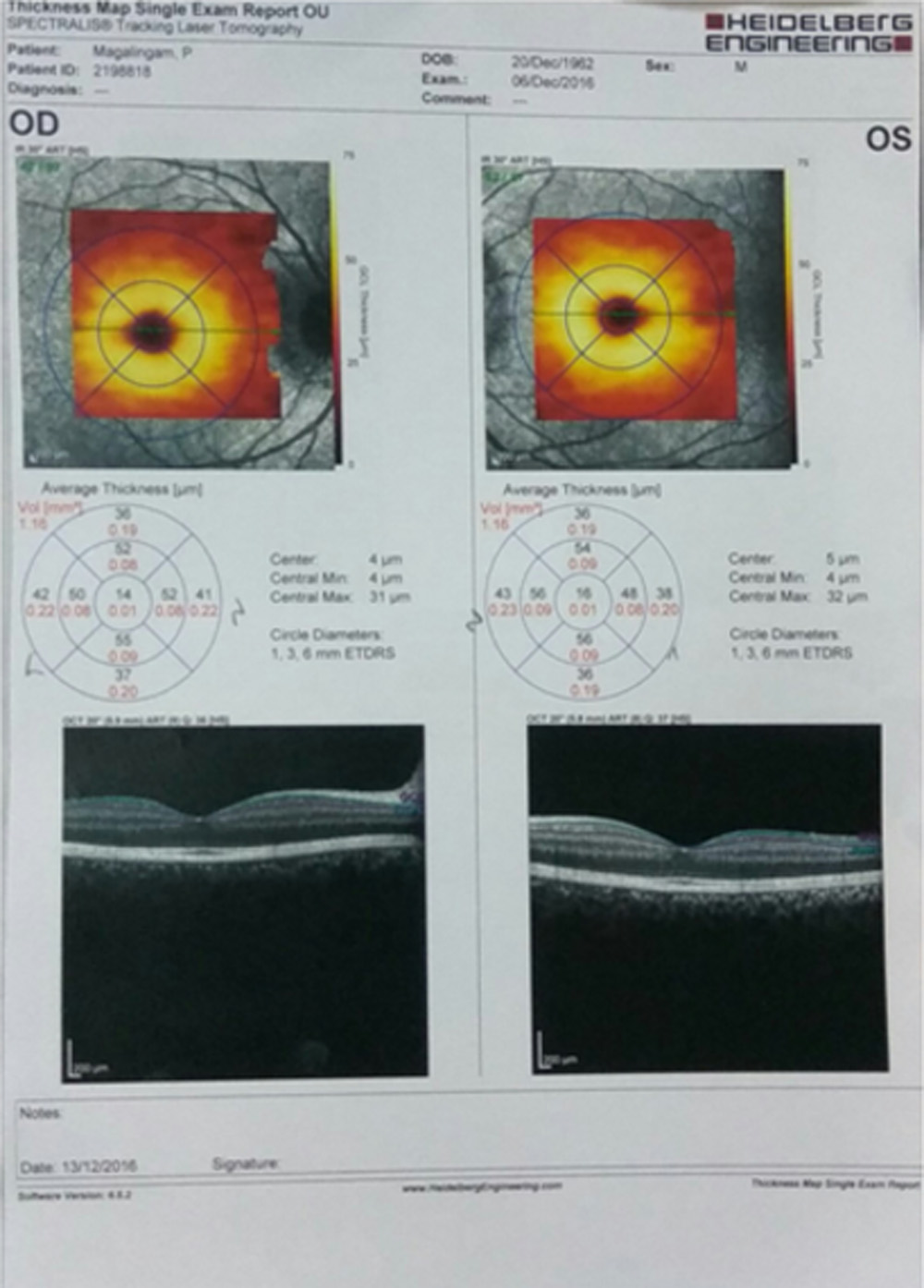 The scanned area was 6mm in the protocol with no signal averaging. Signal strength (0 – 10 arbitrary units) was used to assess the quality of the obtained images. Scans with signal strength of more than 6 units were included in the study. Automatic algorithms were used to determine GCL thickness, using HD – OCT (SPECTRALIS).

GCL analysis was done by calculating the thickness of the ganglion cell layer and the inner plexiform layer.The GCL thickness was measured in different parts of the macula, around the foveal centre: temporal superior, superior, nasal superior, nasal inferior, inferior, temporal inferior and global. The average, minimum and sectoral thickness of the GCC are measured in an elliptical annulus  around the fovea. Global GCL thickness values, and those in each of the said location, expressed in microns (µ), were used for analysis.

This study demonstrates that ganglion cell loss in NAION follows an altitudinal pattern, resulting in a diﬀerence in mean GCL thickness between the superior and inferior hemispheres of the macula that is signiﬁcantly greater than that found in ON or in healthy controls. This diﬀerence had a mean of 5.7 µm. This corresponds to the diﬀerence in visual ﬁeld defects typically found between NAION and ON.

NAION is most commonly characterized by an altitudinal ﬁeld defect, whereas diﬀuse visual ﬁeld loss or central scotoma is most often found in ON (Keltner et al. 1993; Gerling et al. 1998; Horowitz et al. 2010). The segmental ischemia of the optic nerve is associated with edema initially, which may lead to subsequent damage to other areas of the optic nerve (Ho et al. 2013; Miller & Arnold 2015). Aggarwal et al. (2012) showed that GCL thinning in NAION correlated with visual ﬁeld loss when visual ﬁeld defect was superior or inferior, although 16 out of 23 eyes in their study had bihemispheric loss.

We found in our analysis, the diﬀerence in mean hemispheric thickness in NAION  showed a significant difference statistically when compared with ON eyes or with control eyes. This distinctive, altitudinal pattern was also clearly seen upon viewing OCT images of many of the NAION patients.

This is a possible critical factor in the diﬀerentiating  a patient with ON or NAION who exhibits features common to both diseases. We found that thinning of the ganglion cell layer is evident in both ON and NAION as early as 11 days after onset of symptoms when compared to age-matched controls.

Previous studies have shown RNFL thinning in NAION to be statistically greater in the superior quadrant than the inferior quadrant, but not until 6 months after onset, when the initial swelling has resolved (Contreras et al. 2007; Horowitz et al. 2010). Other studies have shown that GCL thickness may be a better metric by which to evaluate the degree of damage in both ON (Syc et al. 2012; Ratchford et al. 2013; Gabilondo et al. 2015; Kupersmith et al. 2015) and NAION (Aggarwal et al. 2012; Keller et al. 2015) during the acute phase, because the ganglion cell layer, as opposed to the retinal nerve ﬁbre layer, is not aﬀected by the initial oedema that is frequent in ON and ubiquitous in NAION. Our ﬁnding that ganglion cell loss can be seen at less than 2 weeks.

In a recent study, Kupersmith et al. (2015) found a signiﬁcant diﬀerence in GCC thickness between aﬀected and unaﬀected eyes with multiple sclerosis (MS) at 1 month after onset of ON. They found no signiﬁcant diﬀerence in GCL thickness at presentation, on average 7.3 days after onset (Kupersmith et al. 2015). It is possible that the initial diﬀerence was underestimated due to progressive, subclinical GCL thinning that occurs in clinically unaﬀected eyes of patients with MS (Davies et al. 2011; Ratchford et al. 2013).

Meta-analysis by Petzold et al. (2010) found a mean diﬀerence in RNFL thickness between ON and control eyes of 20.38 lm. Our data is consistent with this, with a diﬀerence of 23.2 lm at 16 + weeks after onset. The presence of three NAION eyes with subretinal ﬂuid out of the 32 eyes in our study is consistent with ﬁndings by Hedges et al. (2008) that subretinal ﬂuid occurs in approximately ten per cent of NAION patients. Although the ganglion cell loss of these patients could not be accurately evaluated, the presence of subretinal ﬂuid may be another way to rule out a diagnosis of optic neuritis in favour of NAION.

Patients treated with systemic corticosteroids within 2 weeks of onset may have faster resolution of optic disc oedema, as well as better recovery of visual ﬁelds and acuity (Hayreh & Zimmerman 2008). Experimental models have suggested that the initial swelling in NAION results in compression by the nerve sheath, leading to a compartment syndrome that increases the degree of ischemic damage (Burde 1993; Hayreh & Zimmerman 2008; Levin & Danesh-Meyer 2008; Hayreh 2009; Bernstein et al. 2011), raising the possibility that early treatment targeting this initial swelling might have an impact on the extent of neuronal damage and visual loss).

Our ﬁndings help in recognizing acute NAION which is crucial as appropriate treatment can be started early and vision can be salvaged. Optic neuritis and ischemic optic neuropathy may often be misdiagnosed  for one another in overlapping scenarios such as  a middle aged patient with disc edema, and also  in younger patients with NAION and older patients with ON. We have shown that altitudinal diﬀerence in GCL thickness as measured with OCT is signiﬁcantly greater in NAION than in ON, which may play a role in distinguishing these conditions. An altitudinal loss of ganglion cells supports a diagnosis of NAION, whereas a more diﬀuse loss is indicative of ON. (bihemispheric loss, as seen in one fourth of our patients, does not rule out a diagnosis of NAION).

Though clinical assessment remains the mainstay of diagnosing optic neuritis and NAION, OCT-GCL thickness (Superior/inferior) might aid in differentiating the two in overlapping scenarios .Since we have studied in acute stage of the disease , a long term follow-up with serial OCTs will help in detailed evaluation of the GCL thickness in both the diseases.

Leave a comment or raise a query to the author