ASHAs available in communitycould be potential PEC workers. ASHA Training programme on PEC undertaken & evaluated in a district of Delhi

ASHAs selected randomly from a district imparted one day training on PEC & expected to refer patients to nearby Vision Centres (VC). Their knowledge and skill was assessed & after training and re-evaluated at 1 year. ASHAs asked to conduct vision screening of 40+ population in their areas. ASHA referral noted by Optometrist in VC. Focus Group Discussions (FGD) of ASHAs held to find barriers & facilitating factors in engaging ASHAs in PEC. Training evaluated using Kirkpatrick’s evaluation model for measuring reactions, learning, behaviour and results.

ASHAs can be trained as PEC workers provided they have adequate support.

As per the WHO estimates of 2010, there were 8 million blind in India and 63 million visually impaired.1 Nearly 80% of this visual impairment is avoidable. Universal Eye Health: Global Action Plan (2014-19) sets itself a Global Target of 25% reduction in prevalence of avoidable visual impairment by 2019 compared to the baseline prevalence of 2010.2The most important barrier in eliminating the avoidable blindness from India is unavailability and inaccessibility to eye care services.

Mechanisms need to be identified to supplement eye care services at primary level by task shifting approaches wherein the non-serious ophthalmic condition are managed at primary level by trained para medical ophthalmic assistants and non-specialist Medical Officers and only a smaller proportion of patients requiring operative or specialist services are referred to ophthalmic surgeons. In urban areas however, despite the supposed proximity of the urban poor to urban health facilities their access to them is severely restricted. Ineffective outreach and weak referral system also limits the access of urban poor to health care services.

In order to bridge this gap between community and services there is requirement of an educated workforce who are among the masses. They should be able to understand the felt and unfelt needs of the community and also aware about the accessibility of services and referral mechanism. Government of India made provisioning of one such worker, ASHA (Accredited Social Health Activist) in National Health Mission for every 1000 rural population and every 2000 urban vulnerable population.3 This workforce has been underutilized only as Maternal and Child Health worker, though they were put in place for all healthcare needs of the community.

The present study was conducted to engage ASHAs in primary eye care for awareness generation, identifying people with visual impairment, facilitating patients in seeking eye care services and keeping a record of visually impaired in their community. Kirkpatrick model was used to evaluate the training programme.4

Delhi city with a population of around 16.7 million is divided into 11 districts which are served by a tiered public health system.5The lowest level of public health facility includes dispensaries, MCH centres. Each dispensary/MCH centre has a Medical Officer and Auxiliary Nurse Midwives (ANMs). In areas populated by vulnerable populations, ASHAs are attached to these centres and they are named ASHA units. Each ASHA caters to a population of 2000-3000.

The study was conducted in district of South Delhi.There were 18 such ASHA units in South Delhi district, out of which 12 centres had the provision of vision centres where once a week optometrist used to provide refraction, eye screening and referral services.

This cross-sectional interventional study was undertaken as a part of an operational study of engaging ASHAs in primary eye care.

For sample size calculation, it was assumed that there would be 75% (p) increase in knowledge of ASHAs after training, absolute error margin of 15% (d), Design effect of 3 and 95% Confidence Level. Sample of 100 ASHAs was thus required. For recruiting 100 ASHAs, 7 ASHA units were selected randomly from those 12 centres which was had provision of vision centre. All ASHAs from those centres were included in the study.Written informed consent was taken from eligible ASHAs.

ASHAs were trained incommunity based Primary Eye Care using a Standardized Training Module.6 The training module for volunteers which was developed during WHO-SEARO workshop was used.One day training wasconducted for each centre using the module, movie on primary eye care and role plays.

ASHAs were given hands-on training in screening vision of individuals aged 40 years and above using two “E” charts of 6/60 and 6/18 optotypes. ASHAs were provided a training kit comprising of measuring ribbon, screening cards, referral slips and training module.

Knowledge assessment on Primary eye care of ASHAs was done using pre-tested questionnaire thrice, prior to training, immediately after training and an year after training. Their skill in vision screening was assessed immediately after training and an year later in their respective field practice areas. Vision screening skill of ASHAs was labelled as satisfactory/ unsatisfactory based on four essential criteria: accurate distance estimation, correct card positioning & tumbling, measuring each eye at least four times and recording the vision. If at least three out of four times person responded correctly the direction of “E”, his vision for that cut off in that eye was assumed to be “normal”.

After training ASHAs were given 3- 4 months to conduct vision screening of all 40 plus population of their area using 6/60 and 6/18 cut offs. Apart from vision screening, ASHAs could indicate in referral slips if the person was having Diabetes, diagnosed Glaucoma, symptoms of Presbyopia (near vision difficulties after 40 years of age) or any other eye condition. ASHAs were at the liberty of referring anyone to the dispensary with eye trouble or vision problems irrespective of their age or gender.

In the vision centres, optometrist examined patients and kept a record of those who came with ASHA referral slip.

Focus group discussions (FGD) were held with ASHAs of all these 7 centres. Total of 5 FGDs were held. Each FGD lasted for 40-50 minutes and had 10-12 participants. FGDs were held after 6 months of primary eye care training. The FGD were tape-recorded and content was transcribed.

Pre and post comparisons in knowledge scores were done using paired t-test. For qualitative analysis of FGDs, the transcripts were coded. The codes were merged and patterns identified to generate themes. From the themes, a theory was framed. The analysis of qualitative data was done using Atlas.ti (version 7)

Reaction: Reaction of ASHA towards this training programme was assessed through FGD. ASHAs were quite satisfied with the training provided to them in eye care. They said it enhanced their knowledge. It made them more confident in talking about eye care in community. It helped in enhancing their image in community beyond just “Maternal and Child Health” worker. They were able to counsel patients better and bring them to dispensary for check-up. ASHAs gained knowledge about diseases like Cataract, Glaucoma, effect of Diabetes on eyes, Presbyopia and Conjunctivitis. Regarding vision screening, they were happy to learn about it but found it difficult to do it all by themselves without support and said that they were benefitted by the supportive supervision provided to them in this programme. ASHAs also recommended that this training should be repeated at frequent intervals of say 6-12 months.

Learning: In order to assess the learning achieved by ASHAs through this training, knowledge assessment was done using a pre-tested questionnaire. The sustained increase in knowledge was seen after 1 year using the same questionnaire. [Table 2]

There was significant change in knowledge (69.7%) in all sections immediately after training. When scores after one year were compared with the pre-training scores, again there was a significant increase (45.4%). [Table 3]

Their skill in vision screening was assessed immediately after training and after one year in their field practice area. Immediately after training 45 (44.1%) ASHAs could conduct vision screening and recording satisfactorily while after one year only 36 (35.3%) could do it satisfactorily. Most of them committed error in recording, but were able to correctly measure distance, position and four times tumble the card and made the person cover one eye correctly.

Behaviour of ASHA towards this programme was assessed through FGD. ASHAs were enquired about vision screening and their contribution to primary eye care. ASHA reported following hurdles while conducting vision screening in community like they were unable to screen males on account of purdah, inability to screen vision of working community as they were unavailable most of the time, urban localities were so ountered was that they were engaged in multiple activities and were forced to do the work which was considered important by ANMs and MOICs. ASHAs being incentive based, they requested for incentive for vision screening. They had willingness to work for eye care but hesitated in conducting vision screening. They had developed a good rapport with the community and were able to spread awareness about common eye diseases and eye care facilities available. They also assisted patients in facilitating them in availing eye care services.

Last aspect of Kirkpatrick model was to find out measurable output of training programme.

Reaction of ASHA towards this training is positive. They showed interest in training programme. This is also obvious from the fact that almost all the ASHAs of the designated centres attended training and undertook evaluation tests even at one year. There were minimum dropouts even when there was no incentive given to them for training.

ASHAs showed a significant increase in knowledge immediately after training which was sustained even after an year. There is another study conducted on ASHA training though on a different concept, newborn care. It was seen in that study that knowledge increased more after three months and not immediately, signifying that people learn more by doing.7

Another study from South India a similar study was conducted to evaluate the training of hypertension for ASHAs showed that there was an increase from baseline after training which further increased after 3 months.8

ASHAs felt that one day training was not enough for them and that they required refresher training at frequent intervals because they are engaged in multiple activities, so their attention diverts. Till date there are not many studies conducted to understand the role of ASHA workers in eye care. In one study conducted in Ranpur taluka of Ahmedabad district, 40 ASHAs were able to identify 434 people with vision less than 6/60.9

There are many examples from across globe where primary level workers are utilized for primary eye care as well. This is perhaps the best system where there is integration of eye care services at all levels of public health system. There is a study from Tanzania eye health is integrated into primary care services.10

Through Kirkpatrick model we are able to say that ASHAs can be trained effectively in community based primary eye care which predominantly takes care of awareness generation in community and facilitating patients to seek eye care services. [Figure 2]

Table 3: Change in knowledge immediately after training and an year later.

Figure 1: Trend in patients visiting vision centres who are referred by ASHA 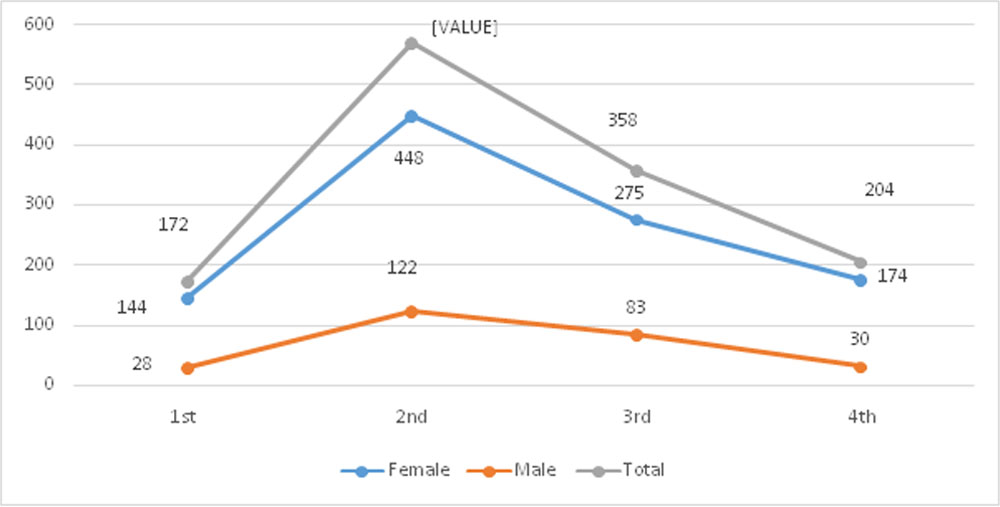 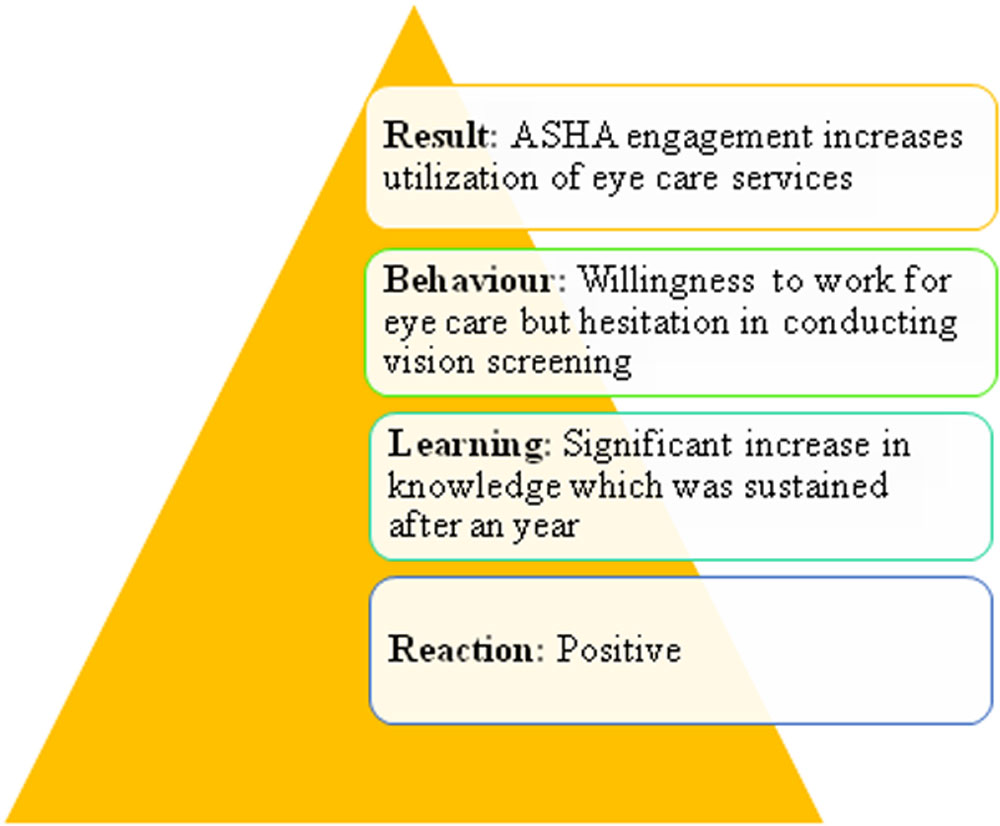