FP1343 : Concept To Economic Impact: a Novel, Indigenous, Low-Cost, Camera for Rop Screening in the Community

From Concept to Economic Impact:

A new, indigenous, low-cost, infant camera for retinopathy of prematurity screening in the community

In India 3.5 million babies are born premature every year. This is the higherthan any other nation. With improving neonatal care, survival of these infants and the burden of retinopathy of prematurity (ROP) are increasing. In India, with a greater proportion of these premature deliveries occurring in the remote and rural areas, the unmet challenge of unscreened ROP has added to the burden of preventable childhood blindness. However, the health care delivery systems in the country today,are incapable of handling this burden of screening. With less then 100 ROP specialists across the nation, screening for ROP is an important public health challenge.

The traditional gold standard of ROP screening was the binocular indirect ophthalmoscope but this has been challenged even in the West. In countries like India, the lack ROP specialists, makes this even more unfeasible. Since 2008, wide-field imaging as an alternative for ROP screening performed by trained and accredited ‘non-physicians’using a tele-medicine platformhas been developed, validated and reported from India (KIDROP.org).  In 2015, an Australian report evaluating this model based on the CDC guidelines, observed that any ‘deviation from the wide-field imaging and photodocumentation could be fraught with the danger of suboptimal care’ thereby firmly establishing imaging as the preferred mode of ROP screening in India.  This has resulted in Government of India accepting wide-field imaging for screening for ROP as a model and has invited cost-effective alternatives to fill the current gap.

The purpose of this study is to report an indigenously invented novel, low-cost, wide-field infant retinal camera for the purpose of ROP screening; its need-based evaluation, clinical validation, rural deployment and economic impact for retinopathy of prematurity (ROP) screening in rural India.

This novel low-cost infant ROP screening camerahas been named the “Neo”. Itwas developed in India by Forus Health, Bangalore, an ophthalmic imaging device company. The research and development (R&D) for the device was initiated in 2012 and evolved through four prototypes with inputs from ROP specialists of KIDROP. The device was enrolled for a safety assessment study at our Institute. The study was accepted by the Institute Research Board (IRB) and the Institute Ethics Committee (IEC) after the manufacturer provided a device safety compliance report for electrical and light safety respectively. The device was tested initially on healthy, adult volunteers before being enrolled in this study on infants.

The study cohort comprised of consecutive Asian Indian preterm infants enrolled for ROP screening under the KIDROP program. All study infants were  born< 2000 grams and / or < 34 weeks gestational age and were < 30 days of life when first screened, as per the current national guidelines. The KIDROP program provides ROP screening for 107 neonatal intensive care units across 30 districts of Karnataka. The study cohort comprised of the rural, semi-urban and urban zones of this program.

The systemic adverse effects were investigated for in a pilot period (2015) and were submitted to the Ethics committee following which multiple Neo devices were deployed in various zones of rural Karnataka for comparison with the RetCam Shuttle (currently in use in KIDROP since 2008).

A comparison between the Neo and the RetCam to detect Type 1 ROP (treatment requiring ROP) and Type 2 ROP (ROP that needs follow up only) was evaluated. The teams that operate the Neo were the same as the RetCam and have been accredited and certified for imaging infants as per previously published guidelines.

Both cameras were used on each study baby alternately, one baby with the Neo first and the subsequent baby with the RetCam first, to prevent device induced plus disease or artifacts that may alter the outcome. Images of the Neo were cropped to resemble the aspect ratios of the RetCam, so that the source of the device could be masked. All babies underwent imaging of the anterior and posterior segment as per standard published KIDROP guidelines.

Two ROP specialists were chosen to evaluate the images. They were provided with anonymized images of the two devices (masking the source). Only the study number, birth weight, gestational age and postmenstrual age (PMA) at the time of imaging were provided with each image set. The experts were asked to grade the quality of the image set, and decide one of three possible outcomes 1) no disease (i.e. immature retina) 2) any stage of ROP (and specify the stage, the zone and the plus disease) and 3) mature retina. The experts were also asked to decide whether they would like to a) discharge b) follow-up c) treat the baby based on the both eyes status provided in the study set.

To assess and compare the cost benefit analysis between the two devices in a working, real-world setting of KIDROP, we used previously audited financial and logistic statements as a ground truth. All costs that were required for the operational continuation of the program were computed. Some of the CBA parameters that were used for comparison were: cost per screening (assuming approximately 6000 screening sessions performed each year), cost of the import and shipping of the device, insurance costs (both one time and recurrent). warranty (costs incurred in the case of loss or damage), training costs (costs that would be incurred to train the manpower to effectively use the device) and other indirect costs.

Descriptive analysis was performed for means of continuous variables and proportion for categorical variables.Repeated measure one-way ANOVA was used to look to see if there was a significant overall difference between any two groups. Vassarstats was used for analysis and G-Power for sample size calculation.

The study introduces a novel, indigenously manufactured, infant wide-field retinal camera. Some of the novel features compared to the current gold standard camera (i.e. RetCam, Clarity MSI, USA), is the illumination system which is LED, a liquid lens focusing system, relatively light weight (310 grams), more compact and portable with a unibody hand probe with an attached 120 degree lens that cannot be detached. The RetCam on the other hand has a 130 degreelens (detachable) a CCD camera and a rectangular sensor. The current version of the Neo camera is depicted in Figure 1.

Figure 1: The Neo – the Indian made wide-field, portable, infant retinal (ROP) camera. Left panel is the camera and light source and the right panel in the footswitch. 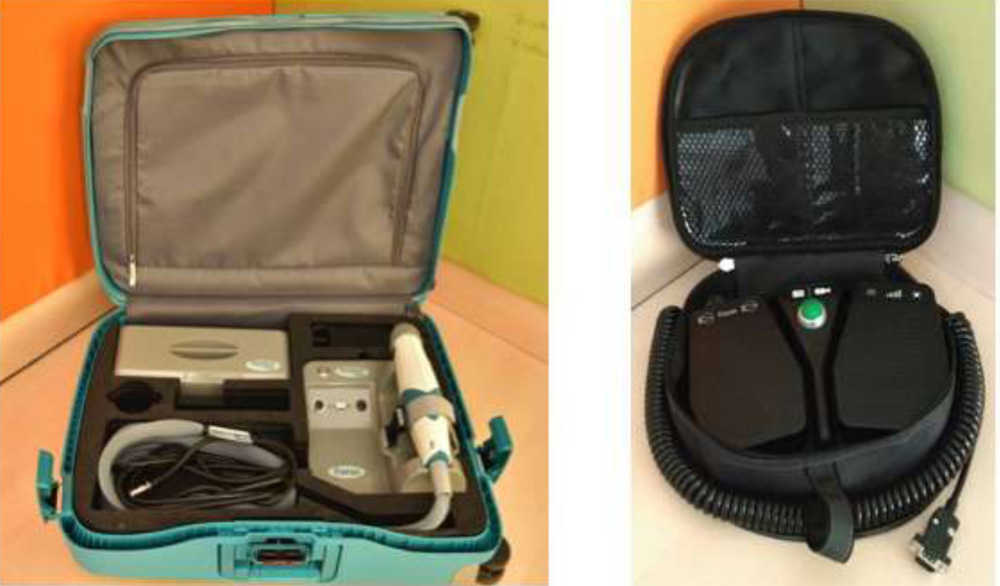 The camera is a product of 4 years of R&D between Forus Health, Bangalore and KIDROP. The prototype has evolved from a large handpiece unit to its current form (Figure 2)

Figure 2: Evolution of the Neo from a larger device to the current lightweight version.

The specifications of the camera are summarized in Figure 3.

Figure 3: Summary of technical specifications of the Neo 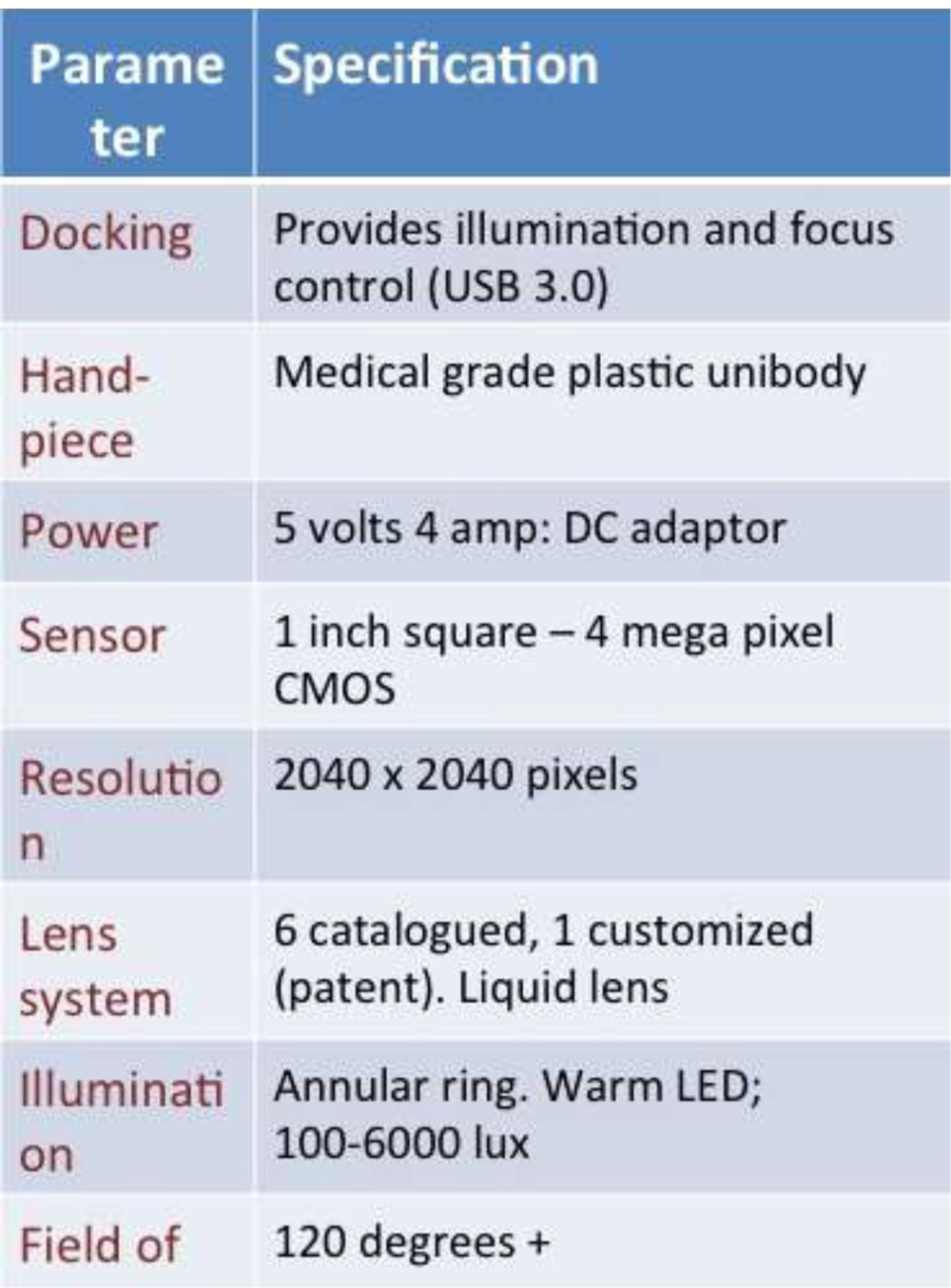 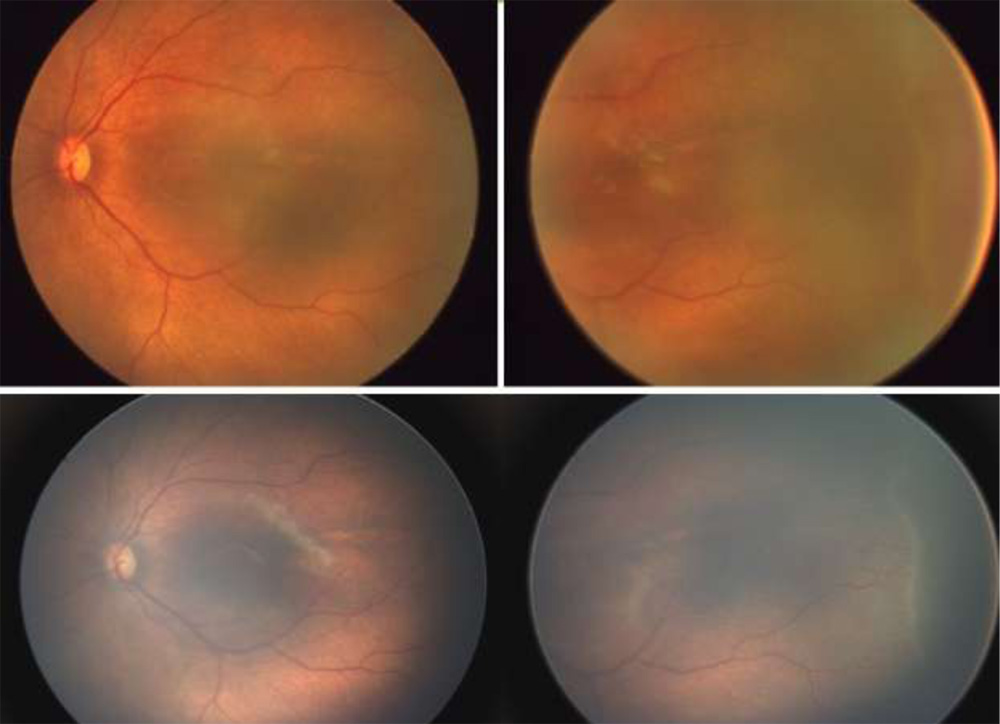 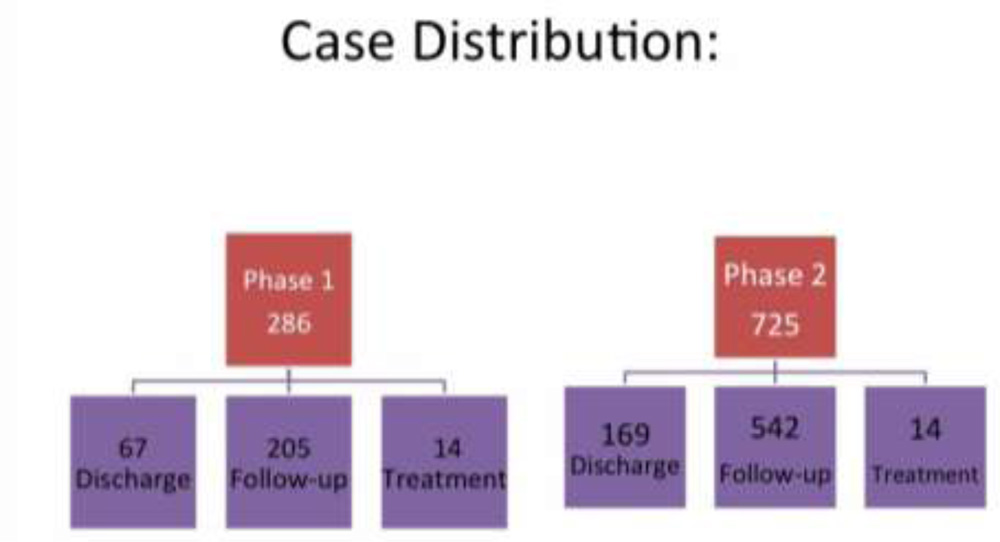 Figure 6-9summarize the statistical analysis that compares the Neo with the gold standard in predicting disease, predicting follow-up, accuracy, prediction of accuracy in different prevalence conditions (Fagans Normogram) and the inter-observer agreement. 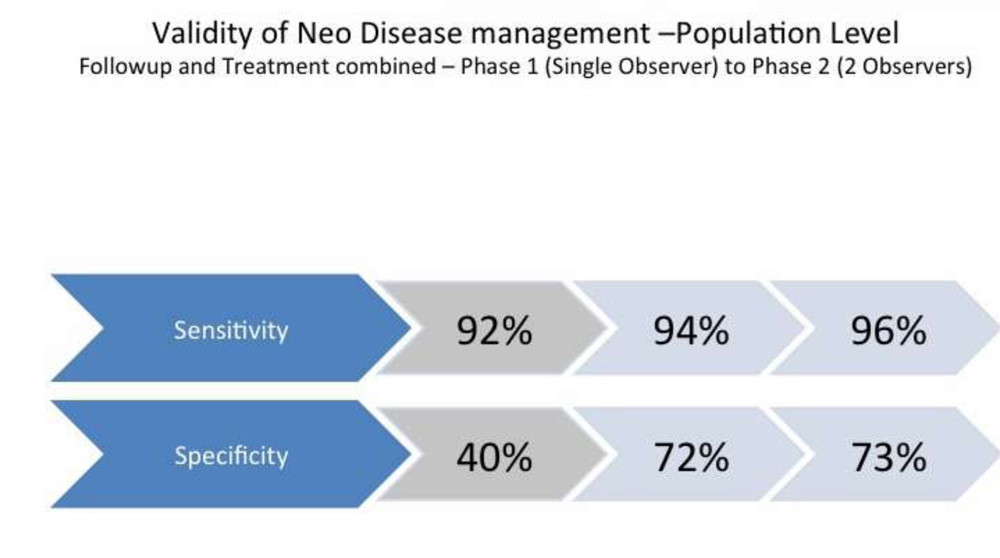 Figure 8: Fagan’s Normogram helps to predict the predictive value based on the prevalence of the disease 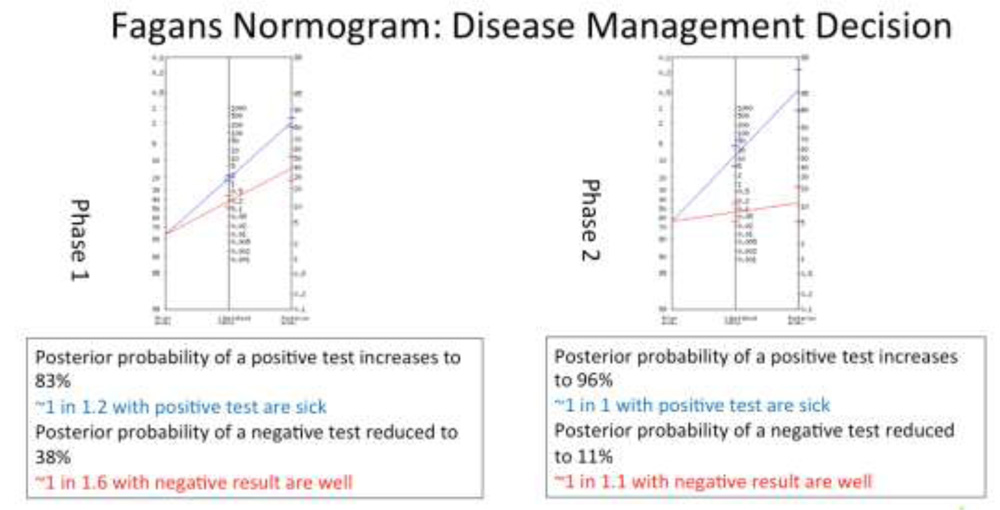 Figure 9: Inter-observer variability between the two experts in predicting ROP on the Neo 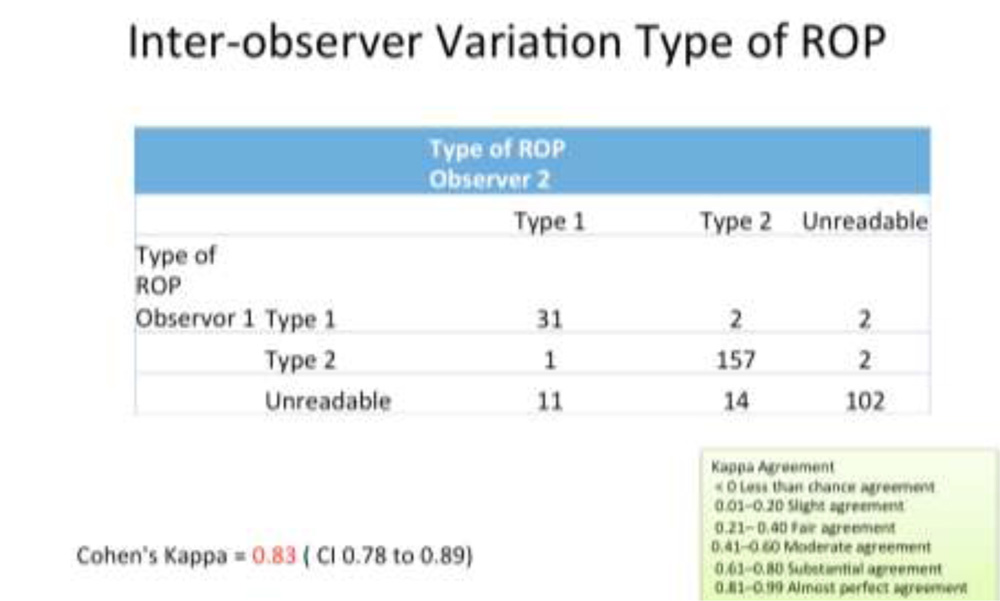 The cost benefit analysis (CBA) between the two devices is summarized in Figure 10. 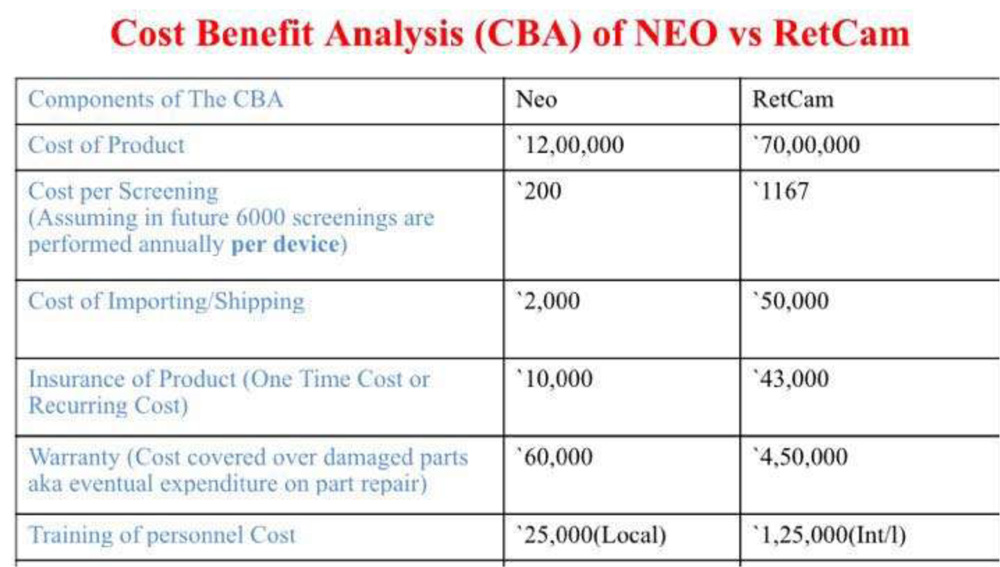