Cataracts are a major public health issue, especially in developing countries.1Approximately 39 million people are blind worldwide.2According to a 2004 World Health Organization report, 47.8% of blindness worldwide is due to cataract.3 Of the disability-adjusted life years due to cataract more than 90% are in the developing world.4 Cost of surgery and lack of awareness are the most commonly cited barriers to patients obtaining surgery in developing countries Cataract surgery has become the most commonly performed intraocular procedure, with constantly improving outcomes. The intra-capsular technique had been popular until the early 1980s. Planned extra-capsular cataract extraction gradually became more widespread; it was then further refined by phacoemulsification.5

Methods to increase accuracy and precision in cataract surgery are being investigated because, as lens implants become more advanced, patient expectations for near-perfect vision are increasing. The premium intraocular lenses (IOLs) also depend more on precise centration for optimal performance. The new femtosecond laser systems usher in the future of cataract surgery and bring us one step closer to an ideal surgery that corrects cataract and astigmatism.

The introduction of femtosecond laser to the field of cataract surgery offers many potential benefits. Although evidence in support of its efficacy is accumulating, there is a surgical learning curve that needs to be addressed.

Femtosecond lasers produce a more accurate and precise anterior capsulotomy, improve intraocular lens centration and reduced intraocular lens tilt. Visual and refractive outcomes, although in limited number of studies, have been shown to be at least as good as conventional phacoemulsification. The impact of reduced phacoemulsification energy on the corneal endothelium is still being investigated

In addition to creating the main cataract surgical wound, femtosecond lasers are used to create limbal relaxing incisions (LRIs). When placed in specific areas of the cornea, LRIs can reduce the amount of astigmatism present, which can, and often does, improve post-operative uncorrected visual acuity. Typically, corneal incisions to control astigmatism have been performed by hand held blades. The major factors determining LRI effectiveness are the incision length, depth, and uniformity, the location relative to the center of thecornea, the incision geometry, the patient’s age, and the amount of astigmatism. The precision of the laser created incisions should allow the surgeon greater control over the final refractive endpoint possibly leading to improved visual outcomes.

Prospective longitudinal single center before and after descriptive study.

55 eyes of 33 patients who satisfied the selection criteria of the study, were recruited and underwent femtosecond laser assisted cataract surgery. These patients had a femtosecond laser assisted procedure performed first, followed by removal of lens matter by phacoemulsification and implantation of PCIOL. They were recruited over a period of 8 months.

Material used: The LenSxR Laser is a CDRH CFR 1040 class 4 and an IEC

2.An aiming device to localize specific targets in the eye;

3.An optical delivery system to precisely deliver laser pulses to desired targets in the eye.

1.Age of the patient – 15 years and above (compliant for surgery under local anesthesia)

2.Patients with reduction in visual acuity primarily due to cataract.

3.Availability,willingnessandsufficientcognitiveawarenesstocomplywith examination and undergo the procedure.

1.Cataracts due to secondary causes

The study protocol and consent form were approved by the Institutional ethical committee of THE EYE FOUNDATION, Coimbatore. All patients fulfilling the study selection criteria as given above were selected for the study. Patients were recruited from July 2014 to February 2015 and followed up for 6 weeks postoperatively. Following recruitmentand after getting valid informed consent, the participants were subjected to a series of pre operative investigations, after which they underwent a femtosecond laser procedure followed by removal of lens matter by phacoemulsification and in-the-bag implantation of the Posterior Chamber Intra Ocular Lens. Postoperatively they were subjected to a series of investigations to assess their visual performance on day 1, week 1 and at 6 weeks. Endothelial cell count (at 1 and 6 weeks) and K- reading (at 6 weeks) were measured. A note of intra and post operative complications (if any) were made at each visit. The pre operative & post operative results were compared.

7.K- READING : Manual K reading K1 and K2 were obtained with the BAUSH AND LOMB

keratometer and was measured pre operatively and at 6 weeks post operatively. The relative change in the corneal curvature following the procedure was compared

BIOGRAPH (Wavelight ALLEGRO) and immersion biometry was used for all the patients to determine the axial length. The IOL’s were selected according to the patients’ preference. All three available third-generation IOL formulas (SRK/T, Hoffer Q, and Holladay 1) and optimized IOL constants were used for IOL calculation.

The corneal topography was assessed with WAVELIGHT OCULYSER II pre operatively. The pre-operative keratometric readings and amount of astigmatism were reconfirmed, as they are the key factors in planning the femtosecond laser assisted corneal arcuate keratotomy incisions.

Measured with Bausch and Lomb F.A.C.T chart pre-operatively and at 1 and 6 weeks post operatively.

Patients were then followed up on the 1stday and at the end of 1stweek, and 6thweek post-operatively and the following parameters were assessed:

The femtosecond laser assisted cataract surgery requires the use of highly sophisticated machinery and is a financially demanding procedure, which cannot be afforded by all. Our hospital is a tertiary care centre performing an average of 180 FLACS cases per year. Affordable patients who presented to us from July 2014 to February 2015 with diminished vision primarily due to cataract and satisfying the inclusion and exclusion criteria were enrolled in our study after obtaining informed consent.

Thus 55 eyes were recruited for the study.

The data was collected and entered onto the Microsoft excel 2007 spread sheet. Statistical analysis was performed by the statistical software SPSS version 21.0. Continuous variables are represented as ‘Mean (SD)’, and categorical variables are represented as ‘Frequency (percentage)’. Comparison of mean was done using the Paired‘t’ test. P <0.05 was considered as statistically significant.

Table-3: Grouping of the study population based on laterality:

Table-4: Grouping of the study population based on the nature of cataract:

Table-5: Grouping of the study population based on the type of IOL

Among the IOLs, a majority of the eyes were implanted with Aspheric Single piece IOL (49%) and the Restor Multifocal IOL (45.4%).A small percentage (5.4%), had a ToricMonofocal lens implanted

Thus a majority of the post operative UCVA was in the 6/7.5-6/9 range. A significant number of eyes were found to have an unaided vision of 6/6 when compared to none pre-operatively

The mean pre-operative UCVA was 0.50 ± 0.39 (represented in logMAR) which reduced to 0.22 ± 0.18 on the first day, 0.21 ± 0.14 at one week and to 0.17 ± 0.14 at 6 weeks (represented in logMAR).The mean pre-operative value was compared to the mean 6 weeks post-operatively, and was found to bestatistically significant (p value<0.05) There was a progressive improvement in UCVA in patients after FLACS on subsequent post-operative visits.

Grouping of study population on the basis of their BCVA

Thus significant number of eyes (50), were found with a post-operative BCVA of 6/6 when compared to 13 eyes pre-operatively. The BCVA was seen to improve progressively with no one <6/7.5at 6 weeks.

OUTCOMES BASED ON RESIDUAL SPHERE

There was a marked reduction in the range of the spherical equivalent at 6 weeks post operatively compared to the pre operative values.

There was an improvement in contrast sensitivity, evidenced by a progressive reduction in mean form 0.281 pre-operatively to 0.036 at one week and 0.027 at 6 weeks post-operatively. (Table 16 and Graph 21).The pre operative and post operative values were compared, and found to be statistically significant (p<0.05)

Intra operatively 4 eyes (7.27%) had a sub-conjunctival haemorrhage when the docking procedure was repeated; 1eye (1.81%) had a posterior capsular rent; the remaining 50 eyes (89.09%) had no intra-operative complications. 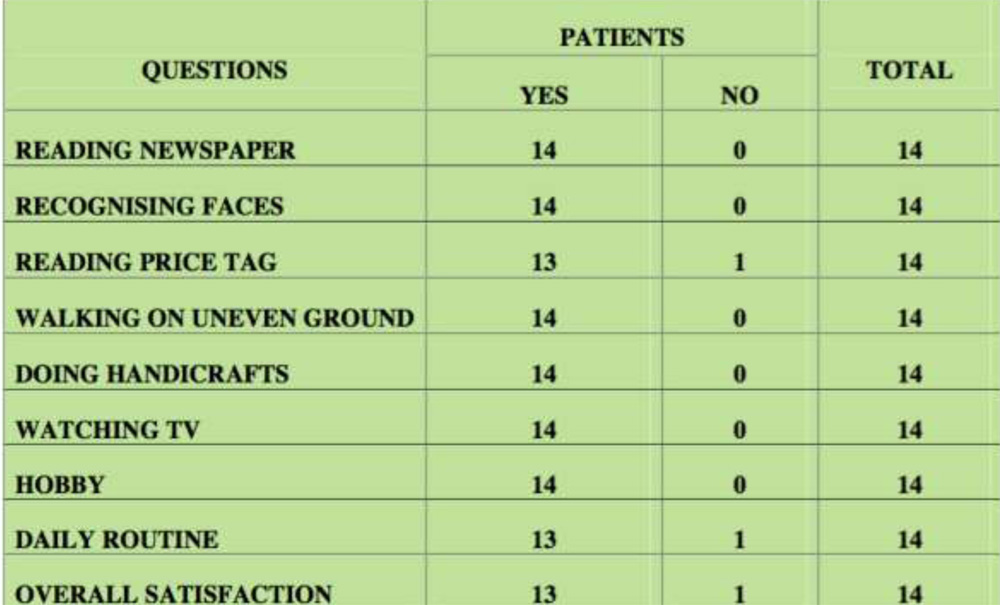 QUESTIONNAIRE: RESPONSE FROM PATIENTS WHO CHOSE OTHER IOL

When presented with a questionnaire on the 6thpost operative week we received a positive response from most of the patients who had chosen a multifocal IOL. (Table 20 and Graph 25)Among the patients with other IOLs (i.e single piece and toric), few patients had difficulty in performing near tasks without their presbyopic correction. (Table 21 and Graph 26)

However, 31/33 (94%) of the patients were satisfied with the overall outcome, while 2 patients (6 %) were not totally satisfied.

This was a prospective longitudinal single center before and after descriptive study conducted at The Eye Foundation and Post-graduate Institute of Ophthalmology, Coimbatore, South India to analyse the outcomes of Laser Refractive Cataract Surgery in a hospital based Indian population. A total of 55 eyes of 33 patients underwent FLACS, satisfying the study selection criteria. These patients were recruited in our study over a period of 8 months (from July 2014 to February 2015) and followed up for 6 weeks.

Patients were followed up post-operatively on the 1stday, 1stweek, and at 6weeks. On the 1stday UCVA and BCVA were measured. At one week UCVA, BCVA, contrast sensitivity and specular microscopy were done and at 6 weeks, along with these investigations, manual k reading was also done. The patient satisfaction was assessed through a quality of life questionnaire at 6 weeks. At each visit a note of any post operative complications was made.

Contrast sensitivity was found to improve, evidenced by a progressive reduction in mean from 0.280 pre-operatively to 0.027 at 6 weeks post-operatively, which was statistically significant.(p<0.05)

Thus, from the analysis of our study we report good visual outcomes with minimal residual refraction, increased contrast sensitivity, a low complication rate and a high level of patient satisfaction.

The Femtosecond Laser Assisted Cataract Surgery is a viable option for cataract surgery over routine phacoemulsification. The post-operative UCVA and BCVA was better than the pre-operative values in majority of patients. Almost all the patients achieved a final visual acuity of 6/6, with a minimal residual refractive error, with significant reduction in keratometric astigmatism, with increase in contrast sensitivity, a low complication rate and a high level of overall patient satisfaction.

The major advantages of FLACS are its precise clear corneal incisions, accurate and reliable LRI’s, reproducible and predictable capsulotomies and fragmentation of the lens nucleus.The rate of intra-operative and post-operative complications are also low.

Hence FLACS provides good visual outcomes with a low complication rate for a wide range of cataracts.It is safe and effective. However, the high cost proves to be a barrier to effectively introduce this technology to patients on a larger scale in our country. More long-term studies on FLACS need to be performed to determine the impact of femtosecond lasers on a long term basis.

LIMITATIONS OF THE STUDY

3.This study was conducted in a single centre and should be conducted as a multi- centric study.

4. Further, a study with a larger sample size would have been more beneficial to assess the outcomes of FLACS.

5. Our follow-up period was short, a longer follow up period is required to analyse the long term outcome of FLACS.

7. As the selection of the IOL was determined by the patient, uniformity could not be maintained

8. The surgeries in this study have been done by multiple surgeons and it would help to analyse the results of a single surgeon.